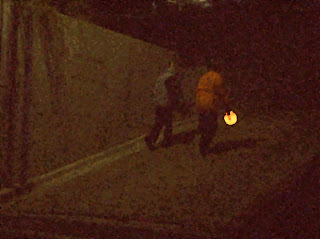 The sharp crack of sticks, the occasional shouts of "hi no yojin" break the quiet of the early evening. It's the day before New Year's Eve and the neighborhood fire watch team is making its yearly round through the empty streets of Narita Nishi.  It's a tradition that harks back to sometime in the Edo period, when the big wooden cities that became the megalopolises of Japan were springing up. Wood means fire. Tokyo itself burned so often that residents in a sort of desperate joke referred to the great conflagrations as the flowers of Edo (Edo no hana). The tradition of community fire patrols lives on, more as tradition than practicality.  But a sure sign of the coming New Year celebration are the teams of folks, one carrying a paper lantern illuminated with a candle, one with wooden clackers, one or two with flashlights, reminding folks to "be careful with fire."  Considering the strange flame spitting, noxious heating contraptions found in many households and businesses and the equally strange and terrifying wiring of many a building here "hi no yojin" is still an admonition to take seriously.
NV
Labels: Culture