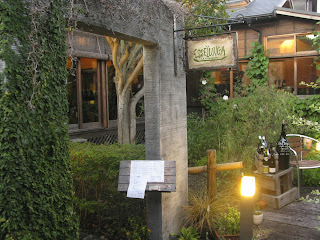 The Ajimi Team wanted to commemorate our last night of housesitting in Kamakura (thanks again Denise and Robbie!) with a really special meal. Over several weeks we had enjoyed tasty Japanese restaurant experiences, yummy beach food, lots of good crunchy korroke, plus some marvelous meals prepared at home from local provender. We were hardly starving but we wanted to round out the dining out portion of our stay with something continental: the European continent, that is. Weeks before a friend had enthusiastically recommended a new Italian place near Hase station on the Enoden Line, started with an "I" or something, couldn't exactly remember the name. On a walk in the neighborhood the distaff member of the team stumbled across Esselunga, which fit the description. Windows overlooked a sunny garden, which was filled with culinary herbs. Yes, indeed, this was the place that our friend had recommended, and on Sunday the team settled in for a two-hour dining experience that could have occured in Rome or Florence or maybe Palermo.

Esselunga opened in spring 2009 on a sidestreet a few blocks from Hasedera. The building appears to be of fairly recent vintage but is modeled on traditional Japanese architecture: viewing the spotless wooden floor from the genkan we asked if shoes were allowed. Of course, they were, and we were escorted to a table for two overlooking the herb garden. There was just one other couple dining at 6 pm on Sunday (the room seats around 20). We settled in with the help of a friendly, unstuffy and English-speaking waiter who guided us through the selection of white wines by the glass. We selected the vermentino by Poggio di Paterno, a marvelously citrusy and slightly frizzante wine.

There were about 8 choices in each of the antipasti, primi and secondi piatti categories, chalked on a board suspended over the dining room. Choosing took some time. For starters we decided on the carpaccio of the day's fish, inada, or young yellowtail. It was served in an almost fugu-like ruffled arrangement on a large plate with fresh dill and red peppercorns, sliced leeks, lemon and a light vinaigrette accompanied by homemade foccacia and sliced baguettes. The toughest decision was the pasta course. Three varieties of homemade pasta were on offer in addition to an array of other secondi. We ordered the polenta with ragu of lamb and beef and a kind of miter-shaped ravioli (all the pasta is made on the premises) stuffed with the same ragu and topped with a sage and butter sauce. A light sangiovese accompanied the pasta course. 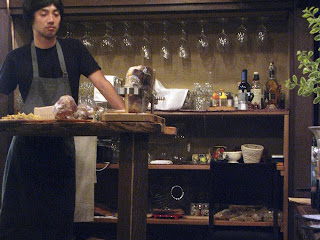 The pasta portions were large and delicious enough that we could have stopped there but, hey, who are we kidding? We moved on to a meat course, roasted cubes of pork paired with dry roasted potatoes. The pork was heaven, slightly fatty, flecked with rosemary and perfectly cooked. We were told that it came from a farm in Yamagata prefecture. We discovered this during a tableside chat with the chef, a young Japanese man who had studied cooking in Milano and elsewhere in Italy. The waiter, for his part, had spent some time travelling in Spain. Their combined periginations help to explain the decidely mediterranean sensibility of this place: service is relaxed yet attentive, and the dishes are perfectly executed.

We skipped the dessert course, feeling constrained by the mental calculation that the bill we were racking up was fast approaching the 12,000 yen we had with us. But we plan to go back, next time armed with (1) more cash and (2) more people so that we can savor more of what Esselunga has to offer.