The fierce urgency of lunch 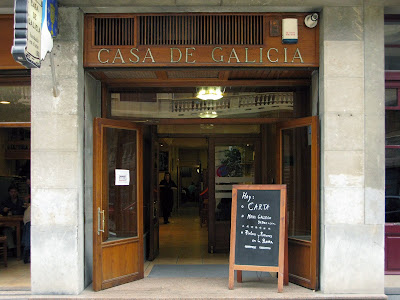 One of the downsides of being a foodie is that, when you travel, lunch can never simply be lunch. That is, it cannot just be an intake of nutrition adequate to the task of carrying one through a productive afternoon. No. Lunch must be an event. There is nothing more disappointing than working up a good appetite then wasting one of your limited lifetime restaurant units on a so-so meal. After all, I might only have 5,000 or so more chances to eat out before I die.

So finding the right place for lunch takes on a fierce urgency when the Ajimi Team is on vacation, particularly in Spain where one is generally within a 5-minute walk of something delicious. We will bypass a dozen perfectly okay places in our quest for the superb.

Such was the case in Donostia in mid-March. Our St. Joseph’s day meanderings led us across the river from La Parte Vieja -- Donostia's tapas central -- to Gros, the rapidly changing working-class district near the Kursaal. By 1 pm we were peckish in a way that augured ravenousness in about an hour. It was early still for a Spanish lunch but we raised our restaurant antennae.

There were bars aplenty, filled to overflowing with contented-looking holiday patrons. But we wanted a sit-down lunch, nothing too fancy, just a chance to relax for an hour or two with some good food, conversation and wine.

We have a rule at these times: either party can reject an option for any reason and we will move on without a backward glance. However, if the hunger pangs start coming 3 minutes apart, either party can also invoke the 10-minute rule. That means we have to choose a restaurant within 10 minutes or risk tantrums.

We were on about minute 9.5 that day when we pulled up in front of a Galician restaurant, La Casa Galicia. It looked like a tidy but otherwise not very remarkable bar at first glance. But the specials board offered an interesting degustation menu served in the rear dining room so in we went.

The dining room was completely booked. But our host laid a crisp white cloth on a table near the bar. Families of various sizes were dining, drinking and chatting all around us. An elderly couple at the next table picked at a plate of patatas bravas sharing a bottle of rosado. 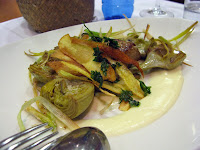 Although the prix fixe menu looked great we opted for the ala carte menu: several nights of tapas-hopping had taken their toll. The menu advertised a hybrid Basque-Gallician cuisine, which was reflected in the presence of more sauces and meat than one would generally find in a straight-up restaurante gallego. The artichokes with foie were served with a lightly 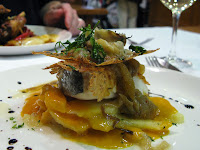 garlicked béchamel. Everything on the plate was nicely crunchy - artichokes, leeks, deep-fried potato chips, even the liver. The layers in the milhojas de bacalao included ragout of eggplant and veggies, cod, a crispy cracker that tasted like the sea, and a topping of lightly sautéed shrimp. The meat course was cordero asado, roasted lamb shank with red peppers and potatoes with sprigs of epazote 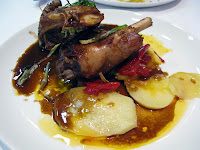 and a sauce that might have contained a splash of balsamic vinegar in a meat reduction. Oh my. We accompanied these magical items with glasses of the house Albariño. We passed up dessert, but the perfectly mellow sensation of wellbeing that followed the meal was better than a million cheesecakes.

Back in Nihon, we discovered that La Casa Galicia is affiliated with an organization of the same name that promotes Galician culture in Gipuzkoa, the Basque province of which Donostia is the capital. They offer gastro-cultural events throughout the year, including barrikotes – tastings of fresh cider out of the barrel – in March.