Eaten off the Beaten Path

In search of "off the beaten track" the Ajimi team occasionally stumbles, but more often than not stumbles onto places and experiences that give a glimpse of... what shall we call it?... soul, essence... maybe... meaning... in this often generic world. A quick weekend getaway to Katsuura, on the Boso Peninsula, brought a sampling of this "stumbling upon" and an experience beyond the traditional trappings of a vacation at the beach.
Katsuura is a medium-sized fishing village on the Pacific Ocean about an hour and a half from Tokyo - taking the express train. A tourist Mecca, it ain't. The waterfront is built for commerce, not for lounging. At the southern edge of town, there's a beautiful kitschy monstrosity of a hotel and waterpark, Mikazuki. We stayed next door to it at Rinkaisou, a tidy little ryokan with an ocean view and various collected bric-a-brac, including a couple of dessicated whale penises. The little breakwater-protected beach in front of the lodging was the only one in town. North of it were packing and distribution warehouses for the remaining fishing operations that launch from this little port. Katsuura is most famous for its daily morning market. According to the tourist info, its been going on for several centuries. It's a lively little market, leaving one to question how on earth it has survived with the dearth of tourists and facilities in the village. But the economics of farmers' markets will be left for a future posting.
When we arrived in town, in the early afternoon, it was hot and getting hotter. The friendly lady at the tourist office had marked a few dining options on our map. We had asked for the best fish places in town. She happily marked off a handful and away we went. Walking the few short blocks of the main shoutengai, the temperature seemed to increase exponentially, so that by the time we found the first couple of recommendations, it was imperative that we choose quickly. Ducking into anyplace cool was the first order or business. Perusing posted menus was out of the question. 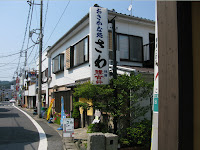 We saw the sign for Sawa, one of the recommended places - the tourist brochure highlighted its local fish. Ducking under the noren and sliding the door open we were greeted by a blast of icy air. A good very good sign indeed. As were the tall jokkis of ice cold beer that we ordered as we were sitting down. And the nutty edamame that appeared as our otoshi. 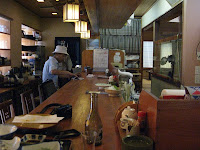 Sawa's an unassuming place. It consists of a fair sized L-shaped counter, a tatami dining area with 3 tables and a back room. We ordered a couple of lunch sets, one with tempura, the other with grilled fish. When asked what was being grilled that day, our host pulled up a thick round midsection of fish and told us it was engira, a local variety of kamasu (梭子魚 - barracuda). He offered to grill up the head and cheek section, but I declined, sticking with what he first showed us. 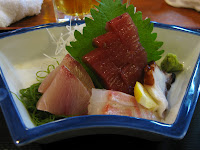 Each of the sets came with a plentiful and very tasty array of sides. A sampling of sashimi included katsuo and buri, both fine, along with an exemplary tai and the best tako I've had in Japan. Far too often, particularly in Tokyo, octopus is like thin cuts of tasteless sea leather. It's more of a workout for one's jaw, rather than something worth eating. At Sawa, thick, juicy cuts of briny flesh that were tender, but with a certain cephalopodic fight, brought back my diminishing faith in ever finding good octopus in Japan. 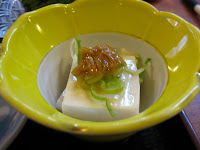 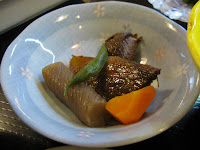 The misoshiro looked innocuous enough with bits of wakame and negi floating in the bowl. But the broth knocked us out with chunks of white fish a deep piscine taste. A little plate of smoky cured katsuo next to a tube of spicy karashi konyaku was scrumptious. The usually bland konyaku was mustardy hot. It went perfectly with the sweet and smoky fish. A little garnish of carrot and piman added to the fusion of tastes. A nice cake of local tofu sported a dollop of enoki mushrooms marinated in mirin and shoyu with fresh sliced negi. It lent a cooling moderation to the set. Tangy pickled cucumbers with katsuo flakes were the mandatory zuke plate. Plus there were three big sweet red beans - for good luck. 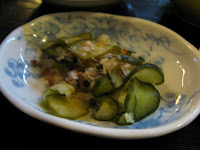 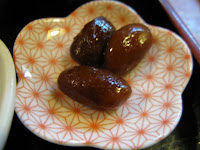 The tempura was a fine version, highlighting the usual veggies - eggplant, kabocha, mushrooms - white fish and prawns and a batter-fried shiso leaf. And the engiri? A revelation. It was served perfectly cooked, moist with a charcoaly char. Though slightly bony, it was the sort of fish that started off mild in the mouth, becoming sweeter as it was chewed, leaving a umami-ish aftertaste. 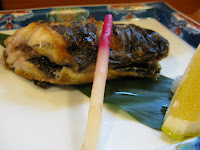 Of course, we had to try some jizake to go with the ji-sakana and this led us to Koshigoi, a local favorite that shows up even in the konbinis in these parts. But the fact is, it's a fine sake. We knocked back a small bottle of their daiginjo, an unpretentious brew that's very sure of itself.
Sawa's website - http://www2.ocn.ne.jp/~sawa/index.html - is as unpretentious as the place itself. There's a tab where you can get fortunes by clicking on your favorite fish and another that has a recipe for namerou, local fish minced with onion and ginger. A traditional Boso Peninsula dish, namerou comes from nameru (なめる - to lick). Apparently because it's so good you gotta lick off the plate. We missed it this time, but we're sure to try it next time we stumble back to Sawa.
Labels: Food Tourism