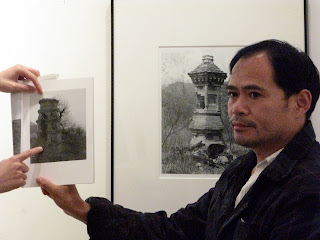 Why do photographers take photographs? The question often has simple answers, yet we insist that there be something more behind them. An industry of criticism, historicism and photo-making often depends upon a false complexity constructed around the urge to take and make pictures.
So, why do photographers take photographs?
There are lots of reasons. A certain color. A play of light. An interesting object or face. A texture or play of textures. To remember.
To remember via a photograph is to create a piece of evidence. A record of time and place. A document (a piece of paper with an analog of the thing photographed) that simply states, I was here to see this. Of course there's a long history of tampering with this photographic evidence (famously with the doctored photographs of totalitarian regimes, more recently with nearly anything anyone can do in photoshop), but there is a long line of "honest" photography that encompasses the humanism of Cartier-Bresson and his acolytes and the documentary formalist strain of Atget, that looks to capturing the things of this world before they are lost to time and "progress." On can easily include, perhaps the most important photographers of the last 40 years, Hilla and Bernd Becher, whose life project of documenting industrial architecture in the Ruhr Valley opened the door to issues dealing with the typology of forms, the roots of industrial capitalism and questions about the reasons and functions of photo-documentation.
I imagine that when the Bechers woke up on a chilly gray morning in a place like Recklinghausen, looked and saw a decaying water tower or mine head, their original thoughts and motivation may have been far from their long term project and may have been more simply along the lines of "we like that thing" or "we like the flat and even light of this place and how it makes that thing look like a sculpture" or "we must take this picture of this thing in our world that we wake up and see every day."
I also image Atget scurrying around Paris, taking photos of funky old shops and businesses, merely because there was something that caught his eye, something he liked in the window, something that just felt right and the place was preserved on a glass plate. As these things and places started to fall to the wrecking ball, a new urgency and new reasons for his profound documentation developed.
Last Saturday the Ajimi team (short of one) had the opportunity to briefly meet Chinese photographer Zhang Yuming at Tokyo's Zen Gallery. He was in town with The Ancient Towers, an exhibition of a series of his photographs documenting old stone towers that are rapidly disappearing from the Chinese landscape. Between neglect and thievery, active destruction during the Cultural Revolution and the vicissitudes of rain, snow, sun and wind, these cultural markers are on the endangered architecture list. The towers he has beautifully and austerely documented are largely places of worship, roadside shrines, sacred place markers and village offering-places. The forms are beautiful, in their shabby and distressed appearance. Their phallic forms mark the landscape, whether hidden behind brush or high on some pillared hill. Evidence that men were here.
Yuming noted that his desire, his reason for taking these photos was to document these things before they disappear. Like Atget, like the Bechers, his motivation is remembrance. The aesthetic choices he makes for framing, lighting, point-of-view and presentation involve the many choices a photographer must make from before the click of the shutter to the mounting of the framed print on the wall. But when it comes down to what makes Yuming go out to far flung landscapes with camera in hand is to remember.
These towers, though, are things that Yuming may not know about, may not have seen before and once found only had a moment to spend with - these towers that house a collective tradition and memory of a culture, where numerous lives (lives with memories) have intersected over the centuries. How does one remember what one doesn't know? Maybe the photographer's function is to be the hippocampus, the center of long-term memory, for the collective entity that we define as humanity. Maybe the photographer is merely the synapse that triggers the memory. As Chris Marker once asked, "How did we remember before photography?" Things like stone towers hold the answer to this question. Collective memory focused on a single object of veneration. It's appropriate that Yuming's choice of subject, with simple motivations, opens the door to a world of new questions.
Zhang Yuming's exhibition, Ancient Towers runs from September 24 until October 17, 2010. 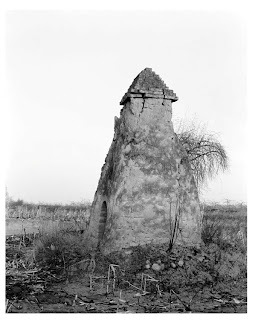