The Warp and Weft of Chichibu

Once upon a time, starting with the fig leaf, the things we wore all came from the natural world. The human wardrobe was just a step or two away from the plants, animals and insects that gave their lives so that we might protect ourselves against the rest of nature. Carding, spinning, fulling and weaving the cotton, wool or silk took time and care and even the most basic garment was an expression of the maker's art. A fine bit of cloth was a cherished object to be worn until it was worn out, then perhaps patched, re-worked and passed on to another user.

The city of Chichibu, about 2 hours from central Tokyo, was for many centuries a center of Japanese silk production. The hilltops are now covered by plantations
of fast-growing 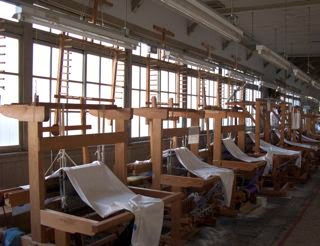 pine cultivated to feed the post-war housing boom, but they were once covered with mulberry trees that fed the silkworms. Families in the silk trade, once amounting to some 70% of the population, built large houses where they could warm the cocoons in winter. The city lent its name to a type of silk called Chichibu Meisen (秩父銘仙) in which designs are stenciled by hand onto the warp fibers before weaving. The result is a sort of ikat effect with the edges of the design bleeding into one another. The style remained popular well into the last century and still can be found in kimono fabric, cushion covers and small items such as purses and book covers.

Although there is not much left of the city's silk industry (war, fashion trends and the development of synthetics having dealt their death blows), you can still get an idea of what once was by visiting the Chichibu Meisenkan (秩父銘仙館). Established by the local meisen association in 1930, this center still engages in the entire process of silk production, from cocoon to finished product to gift shop. You can tour the workrooms (they were idle the day we visited) and take workshops on stenciling and weaving. They have a lovely small museum with examples of meisen dating back to the Edo era. The day we arrived in Chichibu the museum had scheduled its annual mushi boshi (虫干し, literally "dried insect") event during which the collection is hung in the courtyard to air. Unfortunately, the weather was too wet so the event was cancelled and we had to content ourselves with seeing just the items on view in the museum.

While searching the web for other local remnants of the sericulture tradition, I came across the website of Arakei Orimono (orimono is Japanese for textiles). They still produce meisen the old fashioned way. The site provides links to meisen-related events around Japan. I will endeavor to pay them a visit on a future trip to Chichibu.

(Note: Yoichi Shimatsu's web article "Japan’s Silk Reelers Blazed an Asian Path of Economic Development" was the source for much of the background material on the Chichibu silk trade.)