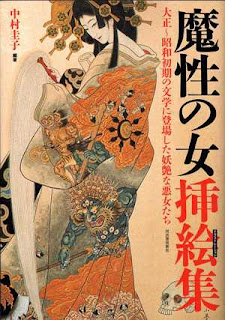 A recent exhibition, Illustrations of Diabolical Women, at the Yayoi Museum, was festooned with images of femme-fatales, terrifying she-monsters, a homunculus or two, and most hilariously, proto-middle class housewives (talk about scary!) who invaded the Japanese consciousness from the Taisho era well into the Showa. The small museum was packed with hundreds of illustrations - for book covers, magazines, posters and the collectors' market. The appearance of the aesthetics of ero guro nansensu (erotic grotesque nonsense), particularly in the early novels of Junichiro Tanizaki and Edogawa Rampo, set the stage for a vision of women at their most taboo, most dangerous, and most thrilling.

One artist that stood out among a mess of interesting illustrators was Sayume Tachibana (1892-1970). His paintings, drawing and woodcuts illustrated a dream-world of seductive, grotesque, strange, and strangely appealing women. One of his most arresting tropes is sort of surrealism of surfaces, where a kimono reveals the fires of hell, a woman's tattoo is a giant louse sucking the life from her body, the hair of a dreaming pair weave and tangle into a psychedelic pattern. And many of his subjects seem to be nodding into a junkie dream-world of sinister stillness, bordering on death. His work was just one of the many discoveries at this gem of a show.

The Yayoi Museum specializes in magazine, poster, manga and other illustrative arts of the 20th century. It's attached to the Takehisa Yumeji Museum, a mausoleum to Yumeji, a faux-naive painter and illustrator from the Taisho era, whose works haven't aged particularly well; imagine Margaret Keane-stye waifs in kimonos, but not painted quite so well. Be sure to check out the Yayoi. Skip Yumeji. 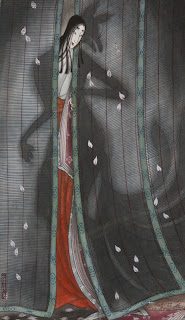 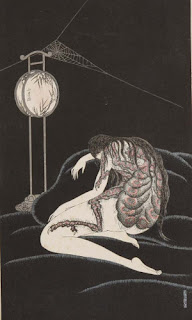 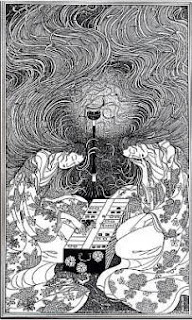 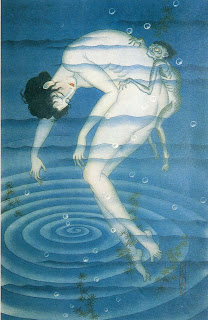