We on the Ajimi team frequently find ourselves feeling nostalgic for disappearing features of Japanese life that we didn't even know existed before we arrived.  Case in point - oden carts.  These handmade, portable dining establishments used to be a frequent sight outside Tokyo train stations. You lift the plastic curtain on a cold winter night and get blasted with vapor rising from a simmering pan of assorted bits of tofu, meat, squid, daikon and hardboiled eggs.  Pull up a stool, and enjoy the warmth of hot sake, conversation and temporary community.  The experience reminds us of the kind of blanket-over-the-dining-table tented fort we built as children - but with booze.

Alas, the forces in charge of the Singaporeification of Tokyo have decided that these cozy little outposts must go.  New licenses are not being granted so the tradition is dying off along with the proprietors.  Granted, these places don't have bathrooms and most of them are pretty far down on the sanitation scale.  Plus, the income they generate is probably barely enough to keep the boss in Golden Bats.  But still.

Fortunately, in the first weeks of the year, Brigadoon-like, a couple of these old warhorses return to the street leading to Fukugawa Fudoson in Monzennakacho. 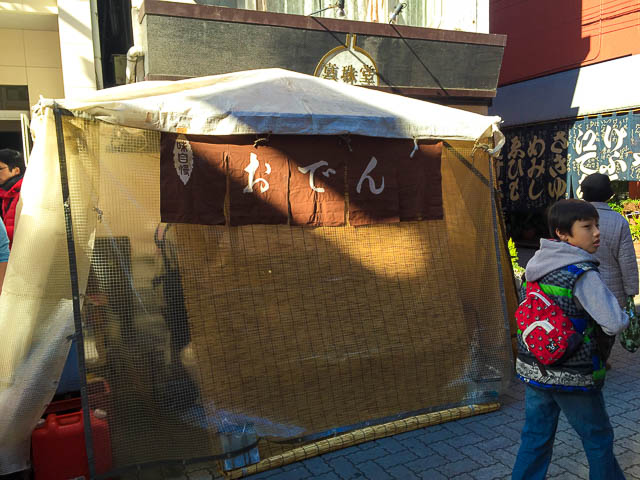 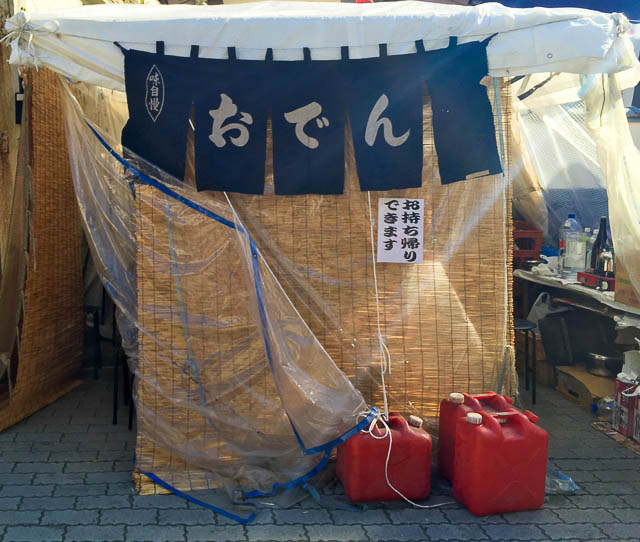 We ducked into one the other day, joining a young, vaping Japanese couple cradling a pair of tea-cup terriers. 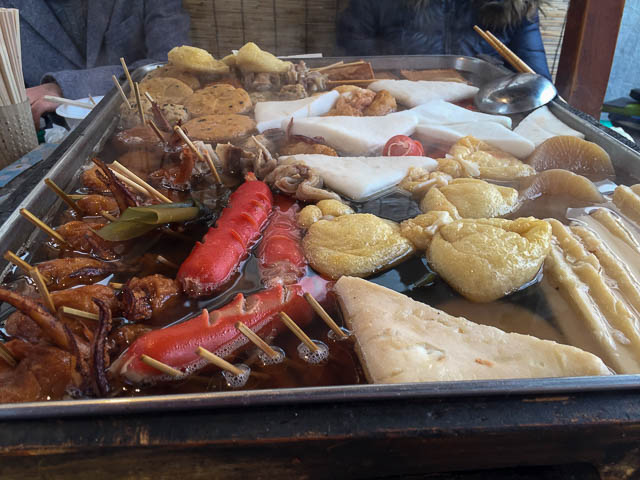 Once we established that we could speak a bit of Nihongo and handle chopsticks without putting an eye out, the conversation turned to the fate of the oden cart, and old Tokyo generally.  Our host has a license to operate in Kayabacho until March.  Then, it's sayonara.  Soon, his will join the retired fleet of oden carts scattered throughout the city. 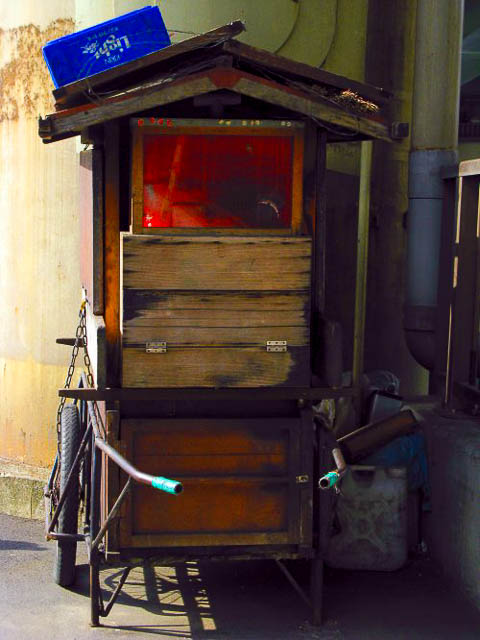 But nearby, modern takes on traditional Japanese watering holes are popping up that retain some of the old-style hospitality.  We are speaking, of course, of the kadouchi (角打ち) or tachinomiya（立ち飲みや), stand-up, corner bars where people rub elbows while they drink.  A few steps from the winter quarters of the doomed oden cart is Orihara Shouten (折原商店).  The main attraction here is the nihonshu.  They have scores of bottles of all kinds, any of which you can sample.  Paradise.  The hosts are welcoming and helpful. Conversations with fellow tipplers have been known to break out.

And for those of you who are also pining for the street food of yore, they offer piping hot bowls of oden.