Skip to main content
Labels
Posted by Nicholas Vroman May 29, 2018 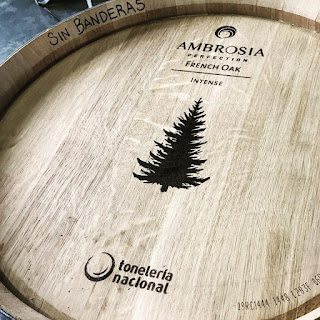 A Mexican, Texan, Frenchman and Washingtonian walk into a winery...and the result is Sin Banderas - "Without Flags." This barrel (photo courtesy of the company's Facebook page) reflects the international character of the wine they produce. It's made of  French oak. The company that produced it, Tonelería Nacional, is a Chilean-based cooper that has offices and production facilities around the world. The silhouetted conifer makes reference to the place where the wine is made - Washington: the evergreen state.  This cask acknowledges that the contemporary world of wine is internationally interconnected, but overlaid with local flavor and pride.

It all started at Owen Roe, the Wapato-based winery, headed by Irishman, David O'Reilly and his wife Angelica. Four folks (the aforementioned Mexican, Texan, Frenchman and Washingtonian) who work there decided to make their own wine.

Jacki Evans, the Texan, emphasizes, "The Owen Roe connection is huge. We knew that previous employees had produced their own wine under the Owen Roe roof. David O'Reilly is incredibly kind, and simply having the opportunity inspired us to collaborate and produce our own wine. This fun side project would not exist without the generosity of Owen Roe."

Jacki's experience working in vineyards and cellars has lent a certain pragmatism to the way she makes wine.

"I feel that working as a harvest hopper between wineries of all sizes and philosophies is a great way to gain experience and perspective. It helps to define the differences between fundamental ideas of winemaking versus individual house styles. It's so easy to fall into a tunnel-vision state of mind, so it's important to understand the bigger picture. So I guess you could say that my approach is to remember practical lessons from prior experiences to help me not worry too much. If you give the wines enough TLC and time, everything usually works out okay"

Their first release, the 2015 Sin Banderas Red Wine is a Rhone-style blend of 80% Syrah from the Outlook Vineyard, in the hills overlooking Outlook and Sunnyside, and 20% Mourvedre from the Olsen Vineyard near Prosser. It carries some of the bigness of wines from eastern Washington, softened by a soothing elegance reminiscent of traditional Rhones. All in all, a strong statement of place and style. And did I say that it's a beautifully crafted and yummy?

In spring, 2018 they released a rose, built with Syrah and Mourvedre. It's been getting great reviews as they've been touring around the Pacific Northwest promoting it. I have yet to try it, but hope to soon.

Sin Banderas makes manifest a somewhat overused maxim about thinking and drinking. But, hey, it's OK if it works, if it's true, and it tastes so good.

To follow and find out more about Sin Banderas wines: 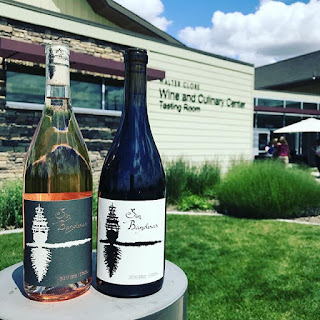