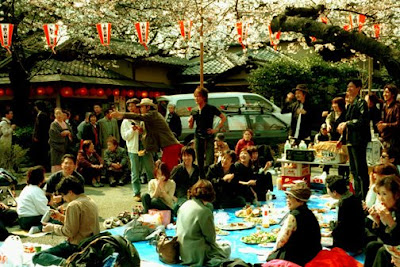 A few years ago I was lolling with friends on a blue tarp during a hanami party at Shinjuku Gyoen. We were tucked under the sakura, several beers into the celebration of spring and the transitory nature of existence when we noticed that a neighboring tree was attracting a lot of attention. One by one photographers, some of them bearing foot-long lenses that looked like they could have been used to read a newspaper on the Moon, came up and snapped pictures of the same ordinary blossom on the same ordinary tree. There were maybe 10 of them. And, according to a poll conducted later that day, 80% of our group had the same thought flash through their heads as they observed the parade: how many other blossoms had these people photographed before, just like that one? Or as one observer quipped: "That's Japan for you: intense, joyless appreciation."

Japanese friends tell me that to understand Japan you have to experience hanami. But unlike other Japanese cultural gateways like tea ceremony or ikebana or calligraphy, which require years of discipline and study, hanami is instantly accessible. It's about liberation from the constraints of winter and embracing the promise of the season ahead. It's like spring break, except instead of heading to...wherever college students go for spring break these days...people of all ages head for the sakura groves with 3-liter bottles of sake and karaoke machines and let loose. It's about controlled hedonism. I have heard tales of one company's annual hanami parties at which a supervisor got bombed and disrobed down to her underwear, then climbed a tree, eve 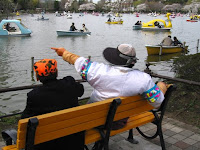 ry year for years, becoming something of a legend among the English teachers who worked for her, and her students. At Ueno Park yesterday, where millions converged for the first Saturday of hanami, two 60-something men attempted to cut their way through the crowd by pretending they were about to barf, like a couple of 8-year-olds. At the Shitamachi Museum at the edge of the park, we saw an Edo-era woodcut of a long-ago Ueno Park hanami depicting a drunken game of blindman's bluff, with one guy on all fours lapping up some spilt booze.

But back to the trees. Clustered together, arching over as you walk beneath them, the blossoms are an exhilarating gift. The world feels reborn in a state of pink grace. The experience is evanescent and eternal and impossible to capture on camera. Nevertheless, some people -- myself included -- can't stop trying. 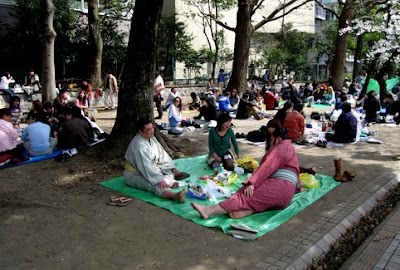