Tiny Freeman was a big man. Anyone who's nickname is "Tiny" is pretty much guaranteed to be big. At 5 foot 18 inches he filled the bill - and he had a larger than life personality. A genuine character of the Seattle scene, he had a flair for doing the freaky and outrageous. He ran as the Republican congressional candidate (no real Republican bothered to register as a candidate - and he was no real Republican) in 1972. One of his planks was a muscatel maintenance program for the local street drunks. His campaign headquarters was the Central Tavern, one of Seattle's oldest watering holes, where he plotted his political career over pitchers of beer. He lost.

He was a regular face on the Pioneer Square scene, working at clubs and bars. Had a radio show on the ur-indie station, KRAB. Hippies and punks called him friend. He worked railroads, tugboats and drove big rigs. And he put his name on a wine - Tiny's Vino Keeno.

These were the days of Annie Green Springs and Cribari Red. The days when you could buy a pitcher of Rainer and dump a glass of NAWICO (now rebranded and known as Chateau Ste. Michelle) Loganberry Wine into it to create the nearly forgotten concoction - the Logie Flip. Tiny's Vino Keeno fit right in.

The wine itself was an "apple wine with grape and other natural flavors added." Yum! It was produced by the Werberger Winery in Shelton - not too far from where the original bunch of grapes for wine production in Washington were planted in Grapeview. The winery gave up the ghost some time in the 70s, not too long after they produced Tiny's Vino Keeno. One hopes that TVK was not the cause. But the winds of change were blowing across the Washington wine biz. Things were beginning to get more sophisticated, and well... better.

Tiny's Vino Keeno wasn't made for cellaring. It was for a cheap drunk. However, if anyone has a bottle squirreled away somewhere, please tell me!

For some details about Werberger Winery, go to this link.

For a reminiscence about Tiny's life and legacy, go to this link. 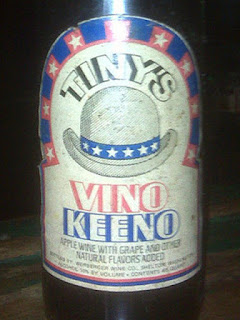