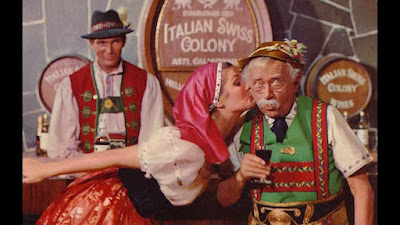 If you were ever within 10 feet of a TV in the ‘60s, chances are you became familiar with a tag line from one of the most successful wine producers of the era.

“That little old winemaker, me!”

The wine, of course, was Italian Swiss Colony. TLOW was portrayed by Ludwig Stossel, an Austrian actor who fled Europe when the Nazis came to power in 1933 (Jim Backus of Mr. Magoo fame provided the voice). Apple-cheeked and lederhosen-clad, TLOW and his pals hinted at old-world Alpine charm within every bottle. The older commercials even featured yodeling. We couldn’t find any of those. Here, instead, is Glenn Yarbrough singing about the love that makes the wine grapes grow.

By 1970, the company had said auf wiedersehen to maedchen in dirndls and howdy to poncho-wearing hippies on the beach.

Another wardrobe change in 1975 - to “satin pantsuits and see-through blouses,” Dick Cavett impersonators and the world of urban sophisticates. And... Ruby Chablis?

The company has an interesting back story. The Italian Swiss Colony was launched in part as an intentional community, as much social experiment as business enterprise. Learn more of the fascinating history here.  The wine company eventually was chopped up, chewed and spit out in a number of beverage-industry mergers and acquisitions and is no more. But you can apparently still visit the place in Sonoma County where it all began.

And here’s a little Dean Martin to take us out.