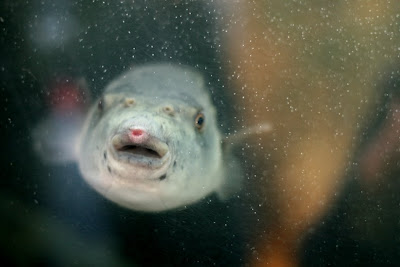 My track record with fugu is not great. My first encounter with this delicacy came during my first-ever Internet date. I knew that this relationship was not going to be long-term within the first 30 minutes when the guy told me that he owned exactly 30 pairs of shoes, most of them expensive Italian ones. Now, as a dedicated shoe fetishist I am not opposed to the idea of a man owning 30 pairs of shoes: I was put off more by the fact that he had classified their number and value as priority information.

Nevertheless, off we went to dinner at a moderately expensive restaurant that featured fugu and shabu-shabu. (The kanji for fugu, by the way - 河豚 - means something like "river pig.) This being November, I ordered une petite verre de Beaujolais Nouveau, the only wine available, which was served well-chilled as red wines generally are in Japan. Shortly, the fugu arrived, arranged like a feathery collar on an enormous platter. A few bites into it I felt a mild tingling sensation in my mouth then, before long, I began to feel decidedly woozy. One glass of wine does not make me woozy, at least, not since 5th grade it hasn't.

After a decent interval my date and I swapped banalities about what a nice time we'd had, must do it again, then I stumbled off to the train and he went home to count his shoes. The next morning, I felt an oral itching and, next thing I knew, the inside of my mouth was peeling off!

My next encounter with a member of the fugu community was when a couple of fins showed up, less than deliciously, in a can of sake that the Ajimi Team bought on the shinkansen to Yamagata. See the February 19, 2008 posting for more detail.

Perhaps these sub-optimal encounters with the fish make me especially melancholy whenever I pass a fugu restaurant. Usually, fugu float around in big tanks in the windows of these places, reminding one of prostitutes in the redlight district in Amsterdam. Ofte 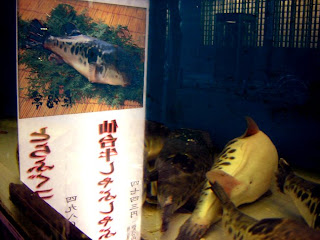 n, a few hapless fugu are "resting" on the bottom of the tank, belly up, past caring about their fate. The live ones are not much livelier, gazing out at onlookers with the calm blankness of the doomed. Which begs the question: how do you select your own personal fugu from among the dozen or so in the tank? My guess: don't pick a dead one.