Slow Food that Quickens the Heart

The Pillow Book, Sei Shonagon's observations of courtly life in 10th century Japan, is full of lovingly detailed observations and obsessively concerned with lists. Among her more famous lists is "Things that quicken the heart." She lived and died long before cacao sailed from the Americas to all parts of the world. And long before the Meiji era, when confectionary giant, Meiji, began its domination of the Japanese chocolate market with its decidedly dreary chocolate bars.  I'm quite sure that on her list that includes such things as "to notice that one's elegant Chinese mirror has become a little cloudy" and "to pass a place where babies are playing", she would have added "to eat chocolate."

Eating pure chocolate - eating good chocolate, one feels a slight surge under the skin, a slight chill on the cornea, a spark of electricity. The heart quickens. The Ajimi Team recently met with a bunch of folks from Slow Food Suginami-ku for a leisurely dinner with internationally renowned chocolate maker, Claudio Corallo. Over platters of pasta, cheeses, and various antipasti, about a dozen of us chatted over all things food, chocolate in particular, at a cozy little Italian cafe called Lemon near Ochanomizu. Conversation rolled in a mix of Japanese, English, French, and Spanish over the course of three hours. As the delightful meal came to a close, Claudio brought out samples of the very artisanal chocolate that he is justly famous for.

First a bit about the man himself. Corallo, originally from Italy, went to Zaire in 1974 where he found his way into the coffee business. Revolution in Zaire and a growing interest in cocoa led him to São Tome e Príncipe in 1993 where he set up shop. He's been on a voyage of culinary love, rehabilitating old plantations, and rediscovering and husbanding ancient strains of cocoa and coffee that found their way from the New World to the tiny islands that he now calls home. 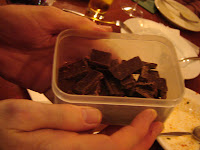 And what about the chocolate? Corallo first brought out 3 of his flagship chocolates; one he labeled his "soft" chocolate - a 75% cacao; his 85% chocolate; and his 100% chocolate. It should be noted that Corallo's chocolates use no vanilla, just cacao and sugar. Even the most "pure" of what's available in the market is no match for Corallo's. His chocolates are simultaneously austere and completely indulgent. Used to the contemporary style in artisanal chocolates that forefront a certain perfuminess and BIG taste, Corallo's seem to be a bit lacking at first taste. However, we found ourselves sneaking more and more samples of his fine chocolates. They unlocked their pleasures slowly, subtly, and to great satisfaction.

Chocolate, often gobbled down unthinking and un-tasting, is common currency. Fast, easy - a quick sugar fix.  We rarely give it time. And much chocolate is not worth much time. The slow food pleasures of Corallo's chocolates, however, were well worth taking some time over.

Just as the dinner was wrapping up, Monica Cespedes and Juan Carlos Fernandez, a couple of Chilean food producers in town for FOODEX, brought samples of their avocado oil, fruit vinegars (not fruit-infused vinegars, but vinegars made from the fruits themselves - raspberry, strawberry) and cusqueño (a dried aji chile condiment).

It was a pleasure to take some time with food and new friends in this city that seems as if it can't go fast enough.  Special thanks to Toshiya Sasaki and his wife Noriko of Slow Food Suginami-ku for putting this all together.

More on Claudio Corallo - his fascinating story and information on his chocolates can be found at this link.

Slow Food Suginami-ku's site can be found at this link.

Chilean vinegars and other artisanal food products can be found at this link.