The Rhythm of Work 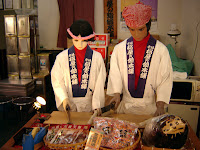 The age of the computer seems to have dealt the final death blow to any idea of music coming from the workplace. Gone are the field hollers, shanties, and chain gang calls and responses. Heavy labor is not romantic. Nor is the modern office place. But what music came from sweat and toil of working men and women! The legacy of songs wholly defined by the rhythm of work is rapidly becoming the province of collectors. The tapping of fingers upon the keyboard may lend itself to some manipulation and novelty in the making of music, but it will never become an intrinsic part of any sort of new music.
We recently visited Kawasaki, a township a little south of Tokyo, most famous for phalli, a pink one named Elizabeth and a more sturdy solid steel prick, which shall remain nameless. They are the prominent features of mikoshi paraded around the streets in early spring during the famous Kanamara Festival.
A few blocks away from the Wakamiya Hachiman-gu shrine, the Shinto fertility shrine that hosts the Kanamara festival, is Nakamisedori, the street leading up to the Oyama gate of Kawasaki Daishi, Kawasaki's main Buddhist temple. Turning the corner onto Nakamisedori, one is greeted by the tap tap tapping of knives on cutting boards in complex rhythms clacking out from the portals of the dozens of ameya (candy stores) lining the tidy walking street.  The seemingly random yells and cajolings of candy sellers add yet another counterpoint to the beats competing from the different stalls.
Here's how it works. The candy maker, making toffees to be precise, rolls and stretches the soft candy into thick cords, all the while chopping in steady rhythm, modifying it occasionally while turning and twisting and placing the toffee into position. Meanwhile, a companion candy maker, sans toffee in hand, keeps a lively counter rhythm going -variations on one, two... and four and...
Unlike the txalaparta, the Basque instrument that has become an aestheticized analog to its humble origins in cider making, the music of the Nakamisedori candy makers still functions within its role as work.  And a joyous sound it is!
The sound of Nakamisedori is so compelling that in 1997 the Japanese Environmental Protection Agency included it in its compendium of environmental sound, 100 Soundscapes of Japan.
Nakamisedori candy makers