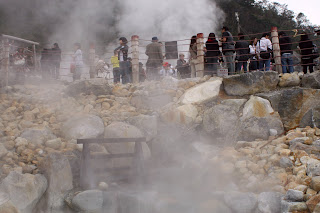 There is a place called Owakudani (大涌谷） in the resort area of Hakone that demonstrates that there are no limits to the local-delicacy-hawking ingenuity of Japanese tourism developers. The name means something like "big gushing valley" owing to the plumes of sulfur and other noxious gases that burst from the landscape. It smells -- and looks -- like absolute hell, so of course we had to go there the other day to check it out.

Owakudani is about a 40-minute bus ride from the town of Hakone Yumoto （箱根湯元）a comfortable little tourist trap where we spent Saturday night. All of the Hakone region is more than usually seismically active and attracts crowds of visitors who need something to do when they are not soaking in hot springs. Owakudani is also a stop on a ropeway that connects the tourist towns of Soun-zan and Togendai on Lake Ashi (the latter is a port for the famous pirate ship excursion). Both Lake Ashi and the sulfur fields were created when Mt. Hakone blew up about 3,000 years ago. 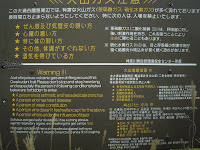 Big signs at the entrance to the nature trail advertise warnings in three languages -- Japanese, Korean and a kind of English -- about the toxic nature of the gases. If you are of "delicate bronchus" you are strongly urged to vamoose. Despite this, a steady stream of tourists climbed the stairs from the parking lot to the end of the trail. What emboldened them to risk lung damage by traversing the volcanic field? Perhaps it was a sense of adventure for some but for others had to be to down a couple of the famous black eggs.

Here is how to make black eggs. Start with regular chicken eggs. Gather several dozen together and put them in a little cage. Attach the cage to its own wee rop 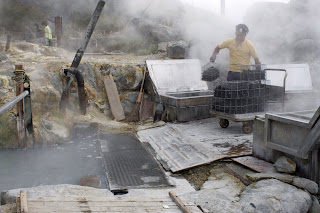 eway and send it up the slope to the edge of a naturally boiling, sulfuric cauldron with big signs around it advising people to stay away. There, have a guy wearing absolutely no respiratory protection gear dip the cages of eggs into the volcanic goop. Keep the eggs in there for probably 10 times longer than you would boil them on the stove as people stand around taking pictures and breathing deeply. Pull them out when they are good and black. Sell the eggs for about a buck a pop to people who believe that eating one will add seven years to their lives (I wonder if that is before or after you factor in death from exposure to the sulfuric acid fumes).

I don't know why the usually intrepid Ajimi Team did not choose to sample the famous Owakudani Black Eggs since we will usually eat just about anything once. Perhaps it was the odor of the surroundings, rather like being trapped in a banquet hall after dinner with 300 people with active constitutions who had forgotten to take their Beano. Maybe we were just full. It had to happen eventually. 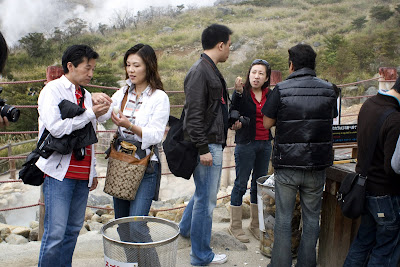