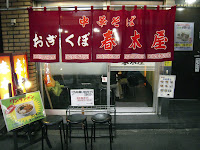 Like many a culinary capital, Tokyo, is the nexus for regional styles and international influences, and by sheer scale a place where one can find nearly anything to satiate one's oral desires. But what foods and what styles denote food that one can truly say "comes from Tokyo."
Well documented is nigiri sushi - the act of putting a slice of raw fish on a thumb sized lump of rice. Also classically Tokyo are standing bars - yakitoria and other places near stations or on corners that befit a fast paced, commuting lifestyle.
And then there's ramen. Or at least Tokyo style ramen. Born in the years of postwar reconstruction, it's a simple style that reflects hard and lean times. American occupation forces brought in cheap wheat flour. Japanese forces returning home from China brought a newfound taste and acceptance of Chinese noodles. Traditional disdain for the inelegant and plebeian food of immigrants fell to the serious demands of hunger. Broth, a bit of protein - slivers of meat or an egg, some preserved vegetables, starch - all basic foods to feed a hungry nation. The Japanese foodscape changed irrevocably. Ramen, in countless variations, is now as Japanese as tempura, originally a Portuguese import. 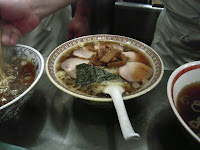 On a cold and rainy November Saturday, the Ajimi team journeyed to Ogikubo, the west side neighborhood where the first famous Tokyo style ramen joints opened in the black market shotengai that popped up near train stations after the war. Laying claim to be the originator of the style is Harukiya (春木屋), an unprepossessing place a couple of minutes from the Ogikubo station.
Unlike many modern rameneria, Harukiya only offers a few variations on the basic soup. But what a soup it is! In essence, thin, kansui-yellowed noodles with a good bite, nutty menma (麺麻 - reconstituted dried bamboo shoots), thin and powerful slices of roast pork, sharp rounds of negi (ネギ - Japanese leek), maybe a perfectly cooked ajitsuke tamago (味付け卵 - a egg boiled in soy sauce, runny in the middle, hard on the outside)  and a shio enhanced stock made of chicken and dried sardines. It's the fishiness of the stock that gives it the Tokyo taste. A trademark of Tokyo style, whether it's with oden, soba, or ramen is the affinity toward things piscine. 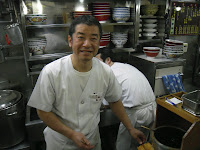 There's an artlessness, an honesty and assurance about the ramen at Harukiya that appeals to our sensibilities at Ajimi. Every wonderful slurp brings time, place, history, necessity, and taste to the forefront of an experience beyond consumption - to an understanding of what makes something Tokyo style.
Harukiya's Website
NV
Labels: Food Ramen