Go west from central Tokyo by train and, within an hour, you are in the mountains. Not big mountains -- for those you need to continue another hour or so by Shinkansen to the Japan Alps. The mountains just west of central Tokyo are wooded and welcoming, laced with rivers and lakes and onsen and hiking trails. Small towns cluster around the train stations on the Chuo and other tributary lines. Like many small rural towns in Japan, these places often have a faded, forgotten quality owing to mass migration to big cities, particularly Tokyo, during the postwar boom. In some cases, local boosters have developed promotional campaigns to lure daytrippers from the capital. Some of these campaigns are fun and quirky, some are just sad. Banners tend to feature anthropomorphic cartoons of the local produce - melons, peaches, whatever - or advertise some aspect of the local culture.

The Ajimi Team found Fujino by describing a 90-minute train travel radius from home base. We were looking for a Sunday hiking destination that involved both open water and an onsen to soak in at the end of the day. A stop past Mt. Takao on the Chuo main line was the town of Sagamiko on the northern shore of its namesake lake. A quick google of "Sagamiko onsen" turned up a very cool site highlighting the neighboring town of Fujino. Here is some of what it had to say...

Fujino, which means "field of wisterias," attracted several Tokyo artists during the war. Since then, other Japanese and foreign artists have settled there, numbering around 100 all together among the population of some 11,000. Since it is a watershed for Lake Sagami, which provides drinking water for a portion of Kanagawa Prefecture, industrial development has been restricted in the area. Consequently, the Fujino municipal government has attempted to promote the town as an "art resort" to boost the local economy. Artists were commissioned to create outdoor sculptures to line an "art trail" winding through the hills. The prefectural government kicked in, building an art workshop and performance space.

This much we knew before we set out on our expedition. At Fujino station, a large map provided the bare minimum of information. (Note to Japanese mapmakers: Pulleeeze start including scales of kilometers, walking times, something to indicate how long a hike one faces from one place to another. The occasional North arrow would be nice, too.) But on a hillside rising to the south (we think) of the station we could see a large sculpture in the shape of a letter sealed with a heart, held by 2 giant red hands. We set off in that direction, following signs pointing to the art trail. All along the way we found stands selling fresh vegetables and nuts, often on the honor system, with no one monitoring the cash box. Persimmons (kaki 柿）, daikon (大根), walnuts (kurumi 胡桃) and a wide variety of potatoes (imo 芋) were the most common offerings.  The directional signs were infrequent and confusing enough that we got lost a few times, though not unpleasantly, since the place is pretty and the weather was sunny and clear.

It turned out that the route circulating through the outdoor art installations was much longer than we could have navigated in the few hours we'd allotted to it. We did see several pieces on our walk which were far more fun and original than the usual kind of public art one sees in Tokyo, where it runs more to lifesize bronzes of naked ladies in front of public 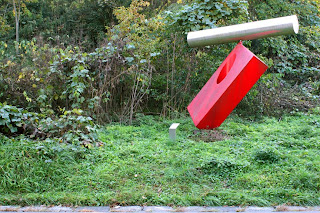 buildings or insane-looking bronze babies frolicking in public plazas. By the time we found a sign that actually showed the location of the 20-or-so Fujino art trail pieces along with photos, the need to find lunch forced us to turn back toward town. After eating soba, we visited a culture exhibition at the local grade school (this was the Sunday before Culture Day). We took a free shuttle bus through the hills to Higashiotaru Onsen where we were able to soak for a couple of hours in 100% natural spring water for just 800 yen. We didn't make it to the prefectural art workshop.

The next day we did some additional googling to find out more about Fujino. The aforementioned cool site, curated by Norman Havens, was last updated in 2004 (are you still there, Norman?). But there was a very recent entry concerning the town on the website for The Guardian. Fujino was identified as the planet's 100th "transition town," and the first one in Japan. Founded in England just two years ago, the Transition Towns movement encourages localities to create their own plans for developing low-carbon economies that respond to the needs of local people. The website for Fujino's group isn't up yet but we will be checking back soon on this community's latest efforts to determine its destiny.

Peregrinor said…
"are you still there, Norman?"

Yes, (blush) I'm still here, though you're right, I haven't updated the site for quite some time. Just too much work, both in Tokyo and Fujino. I held a small photography exhibition, "Fujino: Safari of the Small" two weeks ago as part of the series of arts events (called "Sunnyside Walk") being held throughout the Hizure area this month.
Here's one photo from the exhibit:

We had about 100 visitors at the house over the two days, so it seems more people are noticing the art events in Fujino.
One other note: there are several other nice onsen in Fujino besides the Higashi Otaru you mentioned. Hope you can drop by our neck of the woods again!
November 25, 2008 at 3:44 AM