Jōmon Style for the 21st Century

The Jōmon (縄文) people of ancient Japan may have hit their aesthetic heights at about 2,500-1,500 BCE. Jōmon means "twisted cord" and refers to the distinctive decorative style that marked their ceramics. As any dynamic art, their ceramics developed from the small lightly decorated rough pottery of their early period (roughly 10500-1,200 BCE) to massive and ornate storage and cooking pottery marked by intricate patterns and fancifully fluted lips and brims. These "prehistoric" folk certainly left a historic legacy throughout Japan with bits and shards of their distinctive pottery - which are generally accepted to be the oldest known functional ceramic ware in the world - for future archeologists to speculate upon.
The Ajimi team was out strolling a bit ago in Takaido-Higashi through a little park off the mighty Kanda when we came to a little plaza strewn with some classic/contemporary examples of Jōmon clay work. 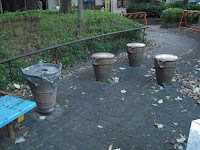 Individual stools, with faux reconstructed body sherds, shaped in classic inverted cone of Jōmon ware were planted solidly into the paving stones along the edges of a small plaza.  The collars were etched in a simple pattern referring to early period Jomon style. Two opposing curls of clay referred to primitive handles, binding the seat tops into a graceful whole. The seat tops were glazed to protect the fired clay from the elements. Glazing was unknown to the Jōmon people. 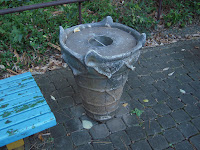 Next to stools was the Jōmon ashtray. Again in the distinctive inverted cone coil construction of much of Jōmon ware. This oversized object highlighted simple yet pleasing castellations on the edges of the collar. Spare and tasteful decorations made by pressing a twisted cord or piece of rope graced the body of the free standing ashtray. 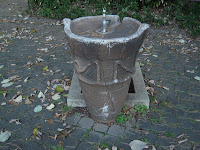 Perhaps the highlight of the ceramic pieces was the drinking fountain. Again in the classic conoidal style of middle period Jōmon ware, the surface was beautifully decorated, the collar simple and functional - as befits a contemporary simulacra of a spring for potable water. 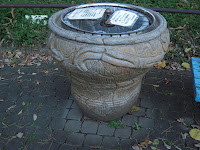 And last, but not least, the garbage can. A bit more Baroque in decoration, referring to late middle style, the shape was more of an inverted bell. The modern and Duchampian touch of a bicycle rim was not only fanciful and art historically resonant, but functional - a great way to keep crows from making a mess of refuse.
Some smart ideas for the 21st Century.  These pieces of public furniture were part of a permanent display that also included a reconstruction of a Jomon hut (Tokyo residential designers take note - these ancient people certainly had better ideas than most of what passes for housing design in contemporary Tokyo apartments) and an information center/museum where the Ajimi team could marvel at genuine pottery on display.
NV
Labels: Culture