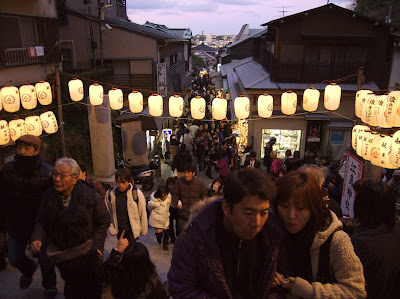 Shortly after the New Year, the Ajimi team took a trip to Enoshima (江ノ島), a little island just south of Kamakura, accessible by a short walk across a long bridge from the mainland. Sometimes referred to as the Mont-Saint-Michel of Japan, it, like the noted French Island, is overrun with tourists, yet still holds a certain enchantment behind the clutter of souvenir shops and tourist cafes and the special way certain shrines maximize profit where there are guaranteed to be a lot of visitors.

Benzaiten (弁才天), one of the seven lucky gods, is the mistress of the island. She's the one in charge of everything that flows - water, words, music, money and sometimes, love. Jostling with the streaming crowd up the bustling shopping street (where curiously many shops sell padlocks amongst the tchotchkes, dried fish products and senbei) one reaches the vermillion torii demarcating the entrance to Enoshima jinja (江島神社), a shinto shrine promoting Benzaiten, a Buddhist goddess.  There's a place to wash one's money under her watchful eyes and for 200 yen one can enter a pavilion where you can see her naked - a lovely and rare sculpture of the goddess unclothed.
Perhaps this bit of titillation is to get one into the mood for love. We humped our way up the hill beyond the jinja past hucksters, through crowds to Okutsunomiya (奥津宮) shrine, where one can see an image the all-seeing turtle seeing all.

Just a bit down the path and to the left a solitary souvenir shop stands, doing brisk business selling padlocks. It's here where couples make their purchase and walk arm in arm up a path to a bluff overlooking the Pacific. A small pavilion on a cement platform houses a bell. Festooning the low cyclone fence on one edge of the platform are locks. All kinds, from simple padlocks to bicycle locks, each sharpie-inscribed with  statements of enduring love, from the simple x loves y to perfect haikus and longer tomes. And it is here where they attach their own.
This is Lover's Hill (恋人の丘), a relatively recent - sometime in the 1960s it seems to have started - promotion that's now become tradition. As the story goes there was this dragon god, Ryujin, who was seriously bugging the mortal folk living on Enoshima. Benzaiten stepped in and vowed to marry Ryujin-san, but only if he left the island and people of

Enoshima alone. She may have had other motives - judging from the dragon that guards a cave/shrine near Okutsunomiya. Whatever, the story's a good one and now a few generations of young and old lovers have made the pilgrimage to Enoshima to hang their locks of love, ring the bell, and slyly pocket the key, just in case. As the fences get filled to capacity, they're taken from the posts and laid on a nearby path, creating a lovely found sculpture to modern love. The bodies and shackles of layers and layers of locks, rusting and slowly returning to the earth.
NV
Labels: Culture