Skip to main content
Labels
Posted by Nicholas Vroman May 17, 2009 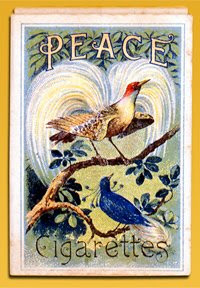 Peace dropped from the sky on August 6 and 9, 1945 in a cataclysmic rain of terror, death and destruction. Six days later the Japanese surrendered and a nation at war was suddenly a nation at peace. Of course, this peace did not come easy. Several years of military occupation and martial law imposed it. The rebuilding of a society took its time. But Japan has since enjoyed an unprecedented nearly 64 years of relative peace.

In the early 50's, as Japan was jump starting its "economic miracle," the great American industrial and graphic designer, Raymond Loewy, was invited to redesign the package of Peace cigarettes. Unlike his simple tweaking of the Lucky Strike logo - creating the most iconic* of American designs, with its clean simple typeface; its red, white and er... gray target; and its straightforward American-ness - Loewy had the chance to begin anew with a completely fresh design. 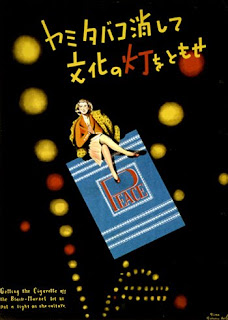 Peace cigarettes tend to bring chuckles to the foreign traveler in Japan. Who would name a cigarette Peace? Or Hope, another long-running brand? And why? One may ask why name cigarettes Now or True? Peace, the cigarette brand, had been around for a while. The whims of marketers are sometimes hard to fathom.

Loewy turned his imagination to an iconic, yet troubling, image of the dove of peace. As the hope and promise of peace was being embraced by a destroyed nation, Loewy made a beautiful, modern and streamlined representation of this ancient symbol. Steamlining and modernity were Loewy's M.O. His dove represents the inviolable march of the future - the modern world of no nonsense, no frills, no embellishments, no sidetracks. Modern design equalled honesty in his eyes. But a closer look at the design reveals a complex undercutting of the basic iconography of the image - the image of peace. The dove itself is plummeting downward. it looks almost like an airplane, or more specifically, a bomber. The dove is not falling from the sky. It is diving toward the earth. Strange behavior for the symbol of peace. The tail, feathers shaped in a V, the Great War's symbol for victory**, adds yet another layer of metaphor to the iconography. What does this dove represent anyway? 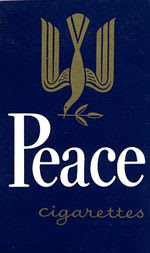 Perhaps it's the image of the allied victory over Japan. Peace from above, enforced on a nation that lost, printed on a cigarette package. In the immediate post-war period, cigarettes, one of the cheapest and most easily consumable of items, lacked the deep stigma of cancer death and health nuisance of contemporary times. In fact, cigarette smoking is still generally accepted in Japan without the social hectoring that accompanies it now in North America. The ultimate victory over Japan was the opening of new markets to the western world. The Japanese have had their moments of turning the tables on market capitalism, but in the current global recession, all nations seem to be in the same sinking boat. Nonetheless, the ubiquitous image of peace remains in the marketplace. And at about 3 bucks a pack, Peace comes pretty cheap these days.

Peace, the logo, seems to show up as a common name/theme for numerous kissaten, the classic coffee shop of Japan. In their 1960s heyday, these often homely places added a pretense of western sophistication in their third place-ness, by not only serving up a strong cup of Joe, but also by being the venue for serious jazz listening and general hanging out. Occupying a seat for hours over a single cup of coffee is not merely an instance of western imperialism of the coffee place, it's a welcome respite in keep-it-moving culture of Tokyo. And coffee and cigarettes go hand in hand. At least they used to.  Near the Bic Camera store outside Odakyu Line west exit is a lovely old fashioned kissaten that goes by the name of Peace. 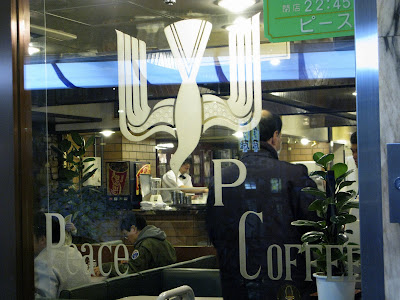 The Tobacco and Salt Museum's current exhibition (until 5/29/09) is about the history of cigarette package design in Japan. Click here for more information.

*Other classic American cigarettes, Camels and Marlboros, are much less "American" in their concepts and designs. Camels refer to the exoticism of the Middle East and Marlboros tend toward a elitism, despite their rebranding in the 60s as a cowboy smoke. Marlboros in package design and original intent speak of high class pleasures. Though it should be noted, despite image, all American cigarettes were and are marketed to the lower and middle classes.

** The index and middle finger displayed in a V sign during and after the WWII years represented victory. The image was changed by the student protest movements of the late 60s and early 70s into a symbol for peace. Nixon tried to reclaim the image as one of victory, but managed only to make of joke of it and himself. The current generation of Japanese have managed to render the symbol totally meaningless in usage in its constant display posing for snapshots.