Do It for Hachiko

If you don't yet know the story of Hachiko, the Akita who faithfully -- and futilely -- awaited the reappearance of his dead master at Tokyo's Shibuya station, it will be coming soon to a theater near you.
Hachiko would trot each morning to Shibuya station with his master, Hidesaburou Ueno, a University of Tokyo professor, and greet him there after work. One day, Ueno-san suffered a fatal heart attack while lecturing. No one told Hachiko the news. The faithful dog returned daily to the station awaiting his master who would never return. Cared for by doting commuters and neighborhood folk he waited for a long time - 10 years!
There's now a mainstream motion picture out, Hachiko: A Dog's Story, directed by Lasse Hallstrom and starring Richard Gere. The new film places the story in a New England town, but the enduring tale of faithfulness crosses all cultures. A word of caution - this same tale was used by right-wing propagandists to stoke the fires of virulent nationalism and helped lead a nation to war in the 1930s. 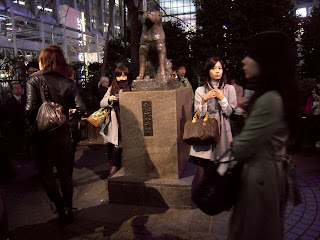 Wading through a wall of smoke from the ever-packed smoking area outside of Shibuya station, one comes to a pleasant little alcove where a bronze statue of Hachiko waits. It's appropriate that the monument for the dog who waited so patiently has become the most popular place in Tokyo to meet friends, lovers and acquaintances.
Hachiko was found dead on a Shibuya street in 1935. His stuffed and mounted body is now on display at the National Museum of Science in Ueno. Near Shibuya is Aoyama Cemetery where one can find a funerary 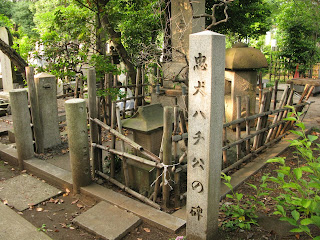 monument to Hachiko near his master's gravesite. Unlike the newly spruced up and well cared for foreign section of the cemetery, where such people as William Clark Eastlake, "dental pioneer of the Orient" are interred, Hachiko's monument is rather decrepit. Not to put down the memory of Mr. Eastlake, but judging by the general state of Japanese dentistry, his legacy has not been all that impressive. One would think that the truly famous and continually inspiring canine would deserve better.
So, the Ajimi team put their heads together and came up with an idea. We would like to suggest that Mr. Hallstrom and Mr. Gere take a small portion of the profits they will make from the new movie and fund a clean-up and restoration of Hachiko's monument. Perhaps a small fund would maintain it into perpetuity? Please help us in this endeavor by contacting their respective agents and gently recommending that they pony up a bit - for Hachiko!
Lasse Hallstrom can be contacted through his agent at United Talent Agency, Tracey Jacobs - jacobst@unitedtalent.com
Richard Gere can be contacted through his agent at the William Morris Agency, Ed Limato - elimato@wma.com
Below is a sample letter. Feel free to cut and past it into an email for Mr. Hallstrom or Mr. Gere - or write your own.
Dear ____,
As a devotee of faithful dog Hachiko and the spirit of loyalty he represents, I am thrilled that you are bringing his story to an international audience.
However, unlike such luminaries as Abraham Lincoln, Ulysses S. Grant, Napoleon and other exemplars of civic virtue, poor Hachiko's monument has fallen into a shocking state of neglect.
Yes, there is a fine and well loved statue of Hachiko at Shibuya Station in Tokyo, but near the gravesite of his master in Aoyama Cemetery, the monument where his soul is enshrined has lain unattended for years.
I would urge you to put aside a small percentage of your profits from Hachiko: A Dog's Story to set up a fund dedicated to the restoration and continued maintenance of Hachiko's memorial.
Sincerely,
____
Labels: Culture Tourism