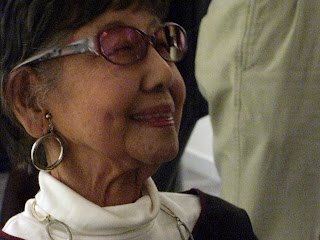 Photography galleries in Tokyo tend to be well on the miss side of the hit or miss equation. Since most galleries function as show rental spaces, there's a decided lack of curatorship or championing of good art on the side of gallery owners. The artist sucker pays for putting his/her work, sits around the gallery for the week or two of the show and the wall-space owner walks away with the rental fee.
It's a pleasure to discover a place where one can find good photography, generous and passionate owners and ultimately good photo art. Gallery Cosmos is a case in point. Hidden on the 3rd floor of a nondescript (aren't most in Tokyo?) building in Shimomeguro, the gallery is the brainchild of Yoichi Niiyama, son of famed photographer, Kiyoshi Niiyama. Since 2003, he has run a tight ship that highlights some of the best in Japanese photography. 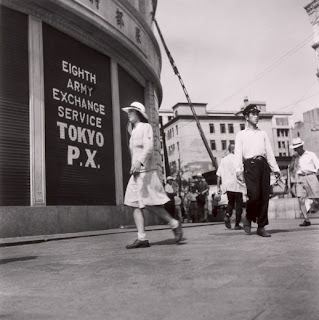 Last Tuesday night found the Ajimi team (or at least half of it) rubbing shoulders with photographers and fans in the crowded space for the opening of Tsuneko Sasamoto's (笹本恒子) photographs. The flyer for the show touted her as Japan's first woman photojournalist. One may quibble about whether she really was the first, but she may be the best. At 96 years old, she held court magnificently. Well-wishers and acolytes gave her her well-deserved kudos.
She started her career in 1940, moved to Chiba during the war years to work for a local paper. She returned to Tokyo in 1946 and started working for the Fujin Minshu Shimbunsha (Women's Democratic News). By the next year she was freelance, documenting the reconstruction, growth and changes of postwar Japan. 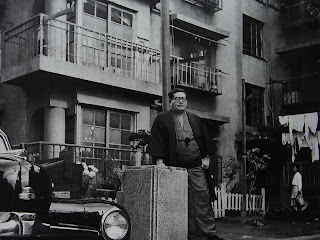 Shooting largely with a Rolleiflex, the classic double-lensed box camera, she captured politicians, organizers, artists, writers, musicians and normal folk in detailed, beautifully lit and lusciously printed photographs. The slightly low angle demanded by the camera lends a certain heroic quality to her subjects, contrasting with the domestic backdrops and environment she poses them against and within. The photos undercut the ostensible reason for photographing these people (they are famous, they are movers and shakers) and democratizes them (they are just like us). Photos of Prince Mikasa commuting on a bus and Princess Yuriko with her children bring the royal family down to a human level. A picture of Socialist Party Head Inejiro Asanuma in 1955 shows him yukata-clad against a non-descript but new housing project, laundry hanging in the background. A new American car peeks from the left side of the frame. With mixed messages about the future and the past, progress and tradition, we are left with the man in the center of it all. 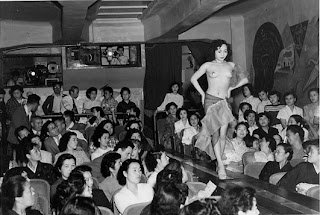 Apart from just how damn good the photos are, with the strength of years, they are a magnificent testament to the times and history of the post war years. From early photos of the meanness and excess of the early occupation to the beginnings of the economic miracle and the rise of the new middle class, Sasamoto-san had her finger on the pulse and her eye on the prize, catching a world in transition with rare honesty and grace.
The show runs from Sept. 28 - Oct 5.
She Saw Showa
Postwar Perspectives by Tsuneko Sasamoto, 96, Japan's First Woman Photojournalist
Gallery Cosmos
Tanimoto Bldg. 3F
3-1-22 Shimomeguro
Meguro-ku
Tokyo 153-0064
03-3495-4218
NV