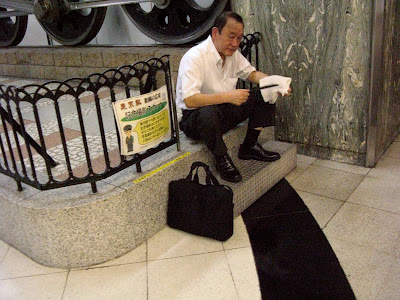 When learning any language, one starts with the greetings, moves on to the pleasantries and hopefully, on to conversation. Asking about or commenting on the weather is standard issue for any beginner. In Japanese, one’s taught “ii tenki, ne” (nice weather, isn’t it), or more formally, “yoi tenki, desune.” A classic icebreaker - talking about the weather. One will learn this in most beginning Japanese classes. But “ii tenki, ne” and “yoi tenki, desune” appear to be expressions that are never used. When talking of weather the ritual always goes – and most Japanese will beat you to the punch – “atsui ne” (hot, isn’t it) or conversely “samui ne” (cold isn’t’ it). In our years here, We’ve never heard a single person say the weather was nice. It’s always too hot or too cold. And if we’ve had the opportunity to say something like, “nice weather, isn't it?” we are usually corrected. It’s either hot or cold. It's never at that state of in betweenies. The weather's never "good."

On this sweltering summer day, we’ve been pondering why. Why can’t the Japanese acknowledge a nice day? A couple of thoughts come to mind. One is that in Japan, there are no nice days. A second is that like cherry blossoms, fireworks, beauty, the weather is something temporal and fleeting. The moment of niceness, of perfect temperature, humidity and good feeling passes. And it passes quickly in Tokyo. One moment might be nice. A few seconds later a downpour. So, when talk of the weather happens, usually that moment has passed and the speaker has moved into a new state of coldness or hotness. It's the only honest way to speak about it.

As to our first proposition – no nice days in Japan – there is some precedence. The Japanese take a strange and obsessive pride in the fact that there are 4 seasons (some sources suggest there may be up to 27) in Japan, all with equally bad weather. In Tokyo, where the Ajimi team lives, one can basically write off June through mid-October. The very long and hot summer here, beginning with tsuyu (the rainy season) in June and capped by the rainier typhoon season from September to October, is unremitting in discomfort. When not pouring rain it’s muggy and hot both day and night. So, during the summer months, what else is there to say but “yeah, it’s hot.” Winter, from December into March, can be pretty cold. Granted not so cold as a Chicago winter, but in a land without central heating, plenny ass-freezing. And then there’s the rain. The Seattleite of the ajimi team sometimes misses the dryness of the Pacific Northwest. As for April, May November and the rest of October, always a crap shoot. They can be OK sometimes, but one never knows. It's best to err on the side of complaint.

We’ve also noticed an absolutism that seems particular to the culture. Take a hot summer day mediated by nice breezes. We’ve mentioned it with friends and acquaintances. “It’s hot, but there’s a nice wind” will only be met with a blank stare. How can a day be hot and have something cool at the same time? Despite Japan’s subtlety – in cuisine, personal relations, aesthetics, pop culture – it’s a subtlety not born of dialectics or semantics. There can be no mediating factors. Weather is strictly ontological. What is is.

So when in Japan, be prepared. Most times it’s easy to say “atsui ne” or “samui ne.” The conditions will certainly warrant the appropriate response. However, on that day that feels pleasant and nice - just right - just hold your tongue. Someone will surely fill you in on what kind of day it really is.
-NV