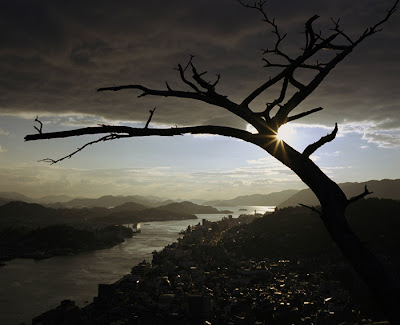 “Sometimes I don’t have a clue anymore
how to retrace, let alone explain the complexity
of even the simplest thing,
or the history of its influences…”
- Wim Wenders, Journey to Onomichi

Wim Wender’s photo book, Journey to Onomichi, begins with a panoramic shot of the sea near Naoshima – looking out from the town of Onomichi toward misty islands. Away from the city he’s ostensibly looking at. The early morning sky fades up from the horizon, a faint yellow ochre to the dull indigo of Japanese woodblock prints. The technology of the split fountain printer’s technique exists in the sky here.
Next come a pair of close-ups. A twisty leathery vine splits the frame. A mound of lichen encrusted Buddhas are dappled by yellow sunlight.
Then there is the establishing shot. The town itself. The shoreline twists away. The roofs of the house glint in the setting sun, peaking from behind a dead tree, its trunk and branches cutting across the frame. The still and tortured tree appears to be holding up dark clouds, if only for the moment of the shutter’s click, letting the sun shine down on the quiet village.
In 2005, Wim Wenders made a pilgrimage to Onomichi, a town on the southeastern edge of Honshu off the Inland Sea about 50 kilometers away from Hiroshima.
In 1953, Ozu Yasujiro set much of his masterpiece, Tokyo monogatari (Tokyo Story), in this village. The old couple at the heart of the story, Shukichi (Chishu Ryu) and Tomi Hirayama (Chieko Higashiyama), live here. In the film they visit their distant and distanced children in Tokyo and Osaka, only to finally return to their hometown where Tomi dies. The shattered yet upright Shukichi is left to mourn not only his wife’s death, but also the passing of family, tradition, even culture. The story is a simple, but the tragedy is profound. Shukichi is like the lone tree in Wender’s photograph, not only bearing witness, but also bearing the burden of these passings.
Tokyo monogatari* opens with a set of shots that will repeat themselves later in the film. The first is of a stone lantern. In the foreground, the perspective makes it look huge. It towers over the waterfront and distant hills. The next shot shows schoolchildren walking to school, away from the camera. A pair of large gabled warehouse buildings form the backdrop. They are white in morning sun. In the foreground, a couple of sake bottles, one of Ozu’s favorite motifs, and seller’s cart complete the composition. The third shot shows village rooftops climbing up a hill. From this stillness a train cuts though from right to left through the center of the frame. Then we cut to a reverse shot, looking down the hill toward the water. The train cuts through again. Some white laundry hanging in the foreground rustles and blows as the black locomotive passes. The fifth shot shows a Buddhist temple sitting on small bluff. The sixth takes us into the shitamachi where the old couple lives. Worn wood and stuccoed walls and a narrow street where a young woman in a crisp white blouse and conservative dark skirt, holding a briefcase walks away from the camera. The next shot finds us in Shukichi’s and Tomi’s house. 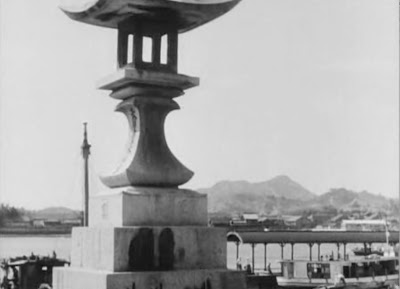 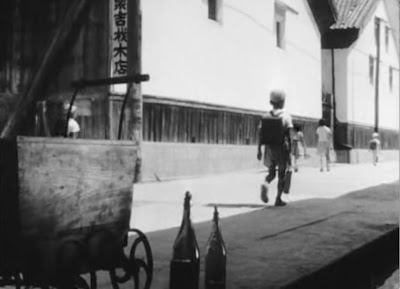 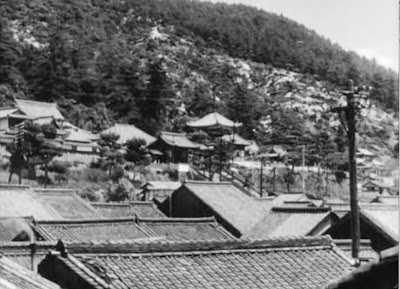 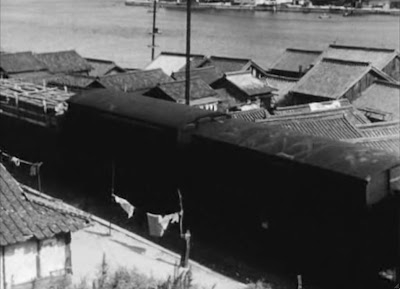 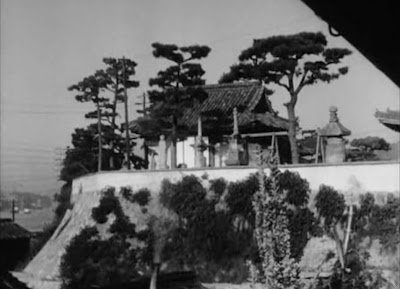 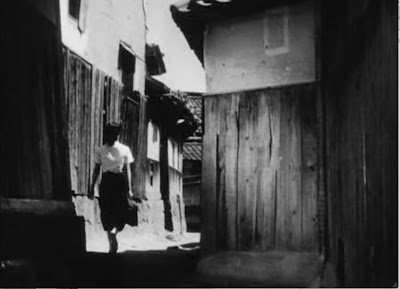 In Journey to Onomichi, Wenders next takes us on a walk through the city streets of Onomichi nearly 50 years later. Down to the old quay, little changed, still dull concrete. Then to a wall covered with leftover dabs of paint, stickers, tape, looking like an abstract map of chromosomes. The next shot looks downhill, a graveyard in the foreground, a swimming pool in mid-frame, the new city stretching beyond. A visit to a battleship – two shots, one with a woman in a red dress in the foreground, the other with a red bench – and the empty submarine factory give way to a series of photos of architecture. The juxtaposition of old and new. Crass advertisements, traditional blinds, the way Japanese have no compunction of constructing jury-rigged additions to solid clunky buildings. The way traditional buildings crowd the streetscape with bastard modernism. With Curved Street, Wenders finds light reminiscent of Hopper’s, similar to his photos of Butte storefronts. With The House on the Corner a lone building fills a triangular lot with layers, cubbyholes, odd windows and strange architectural detail. The next section takes through a couple of shots of photo-abstraction to interiors. These are definitely not the interiors of Tokyo monogatari. A coffeehouse sofa, caught in the amber light of a mean 60s/70s décor. Four photos of Audrey Hepburn being stared at by a gallery of stuffed animals. A row of multi-colored, but similar Teddy bears seem to be particularly enamored of the iconic star – as are many folks of a certain generation in Japan. Near the end is shot, a road at dusk, leading out or leading into Onomichi? It’s up to the viewer to decide. Two final pictures recap with moody skies, one of a dot of a helicopter going out to sea, the other a panorama of the town, a moody ceiling of dark clouds tempering the afternoon light into a dull bronze sheen, capturing Onomichi like a bas-relief. A final casting of the village into history. 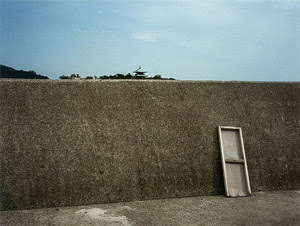 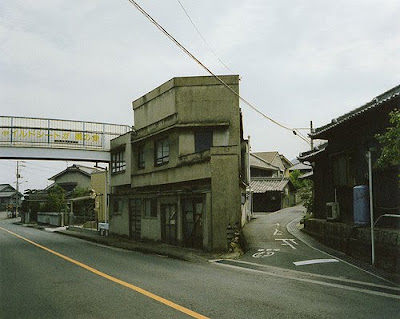 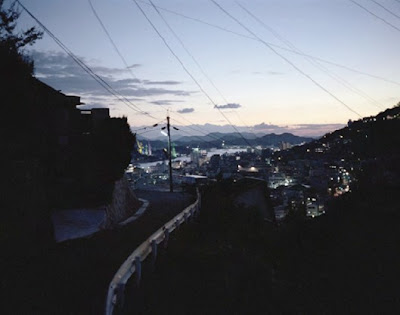 Wenders, who so loves Tokyo monogatari, went to Onomichi to walk the streets, see if he could find the ambiance, the feel of Ozu’s old town and walk away with his own remembrances, photos, still lives, memento mori of a place that he would maybe never see again. Ozu’s Onomichi, from the few exterior shots in his film, is long gone. Like all Japanese cities, what the war didn’t destroy, the economic miracle took care of.

But what Ozu’s film is about is continuum and the rifts that make that continuum difficult or impossible to maintain.
In 1985, I went to pre-Guggenheim Bilbao to take photographs. Partly inspired by Wenders. He was scheduled to shoot a film there in the early 80s, an historical drama about the evacuation of Jews from one of the last open port towns during World War II, as I recall. I could be wrong about the story. It was so long ago and it never got made. I however made my pilgrimage to the place where he would have made the film, documenting city streets, places, graveyards, frontons. A film called Bilbao. 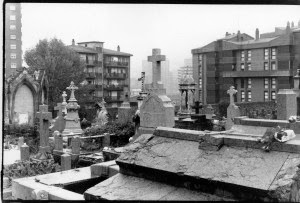 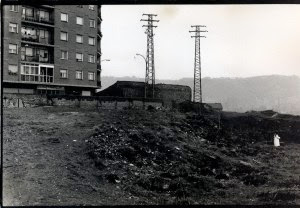 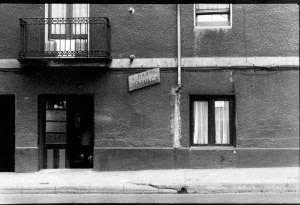 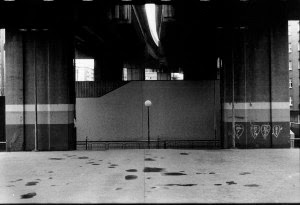 A continuum of something that never happened in my case. In Wenders case, a continuum of a fiction. In Ozu’s, the fiction itself.
When Tomi dies in Tokyo monogatari, the film suddenly breaks from its mooring. It’s as if the tragedy is too much to bear and the film, the audience must cut away. A sequence of shots follows as a mournful tune swells. A covered dock, empty, with a misty hill in the background; the stone lantern, again, but from a slightly different angle; ships, pulled up on shore; the warehouses, but this time with no children; and finally a shot of the train tracks and the laundry. Things change profoundly. A woman dies. Things change subtly. The angles of the shots are slightly different. And things don't change. There are ships, trains, warehouses, docks, the instruments of human commerce. They may have stopped for a moment, in respect to the dead, but they will continue on. 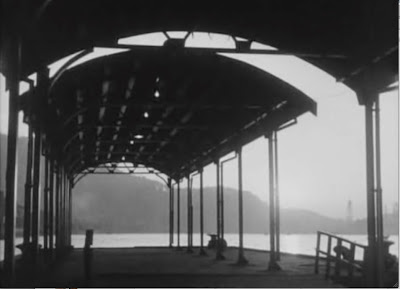 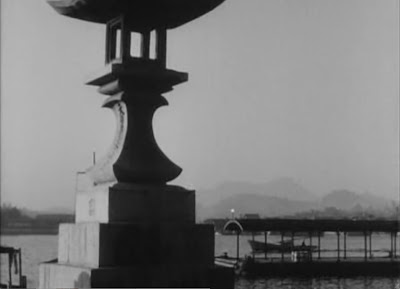 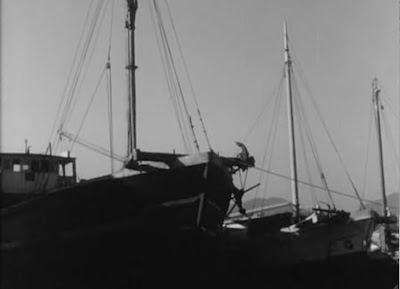 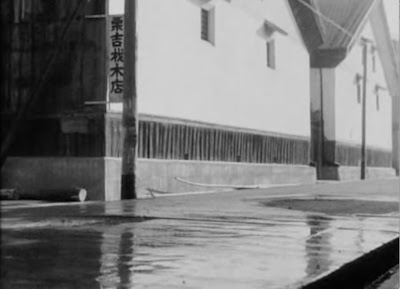 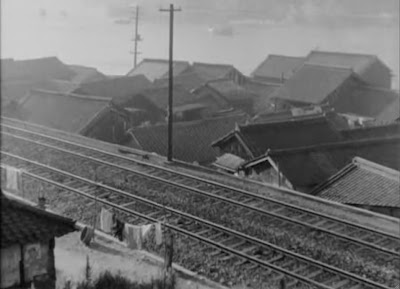 As artists, we not so much heal the rift in the continuum, but perhaps salve the wounds as best we could with our images, our movies and our words. Whether the big events of history, the stories of loss, or the things left undone and broken, with love and care we hope to make this world of concrete and dead trees a bit more human and understandable.
I’ve never been to Onomichi, but Ozu and Wenders took me there. Wenders literally walked its streets, but he never found Ozu’s Onomichi. He found his own. Just as my Bilbao is different than Wenders.
I wonder if Ozu ever dreamed of Bilbao? I’m quite sure, though, if he had made a film called Bilbao monogatari, I’m sure it would probably have taken place in some Japanese furusato, Bilbao far away, pointing back home.


*For a film called Tokyo Story much of it takes place outside of Tokyo. Ozu may be thinking more of the Tokyo-ization of Japan.
- NV