Skip to main content
Posted by Nicholas Vroman May 05, 2015 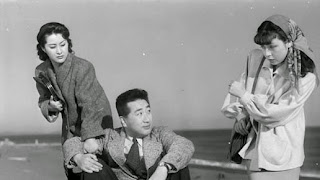 We're just wrapping up with Golden Week here in Japan. Today, May 5, was Children's Day (Kodomo no hi / こどもの日). Since April 29, we've had a series of holidays. Showa Day (Showa no hi / 昭和の日) kicked it off. Yesterday was Greenery Day (Midori no hi / みどりの日 ). And the day before that Constitution Memorial Day (Kenpou Kinenbi / 憲法記念日). This week, binding a few national holidays together, is kind of like the Memorial Day of Japan. Lots of folks take the week off, heading off to vacation spots to get in a nice few days before the misery of summer sets in. More and more people just ignore it, settling in for a few quiet days at home.

Traditionally there was a spike in movie-going during these holidays, back when movies mattered a bit more. In 1951, the film Jigyuu Gakkou (School of Freedom) really took off - a huge hit. This inspired Hideo Matsuyama, then a bigwig at Daiei productions, to give the moniker of "Golden Week" to this time in late April, early May, since it was a week that put a lot of money in the bank for the big production companies and May 1951 was really big. The name stuck. As the years went by, hotels and tourist spots got in on the big chance at sucking out some leisure time yen from the public and Golden Week became what it is.

The movie, Jigyuu Gakkou, has largely been forgotten. There was another film named Jigyuu Gakkou produced by Shochiku the same year. They were both adapted from the novel of the same name by Bunroku Shisi about people coping in postwar Japan. As he put it “My quite ordinary, rather somber, life seemed to demand that the newspaper novel I was writing be a bit boisterous, dramatic, and colorful. This became Jiyu Gakko in which I sought to portray... the tumultuous world that was unfolding under the fiction of ‘freedom’ in those days.”

The Daiei version was directed by Yoshimura Kosaburo and had a screenplay by Kaneto Shindo. The two went on to collaborate for years. Shindo became one of the big names of Japanese new wave of the early 60s.

The Ajimi team celebrated Golden Week staying at home watching the first 4 episodes of Wolf Hall, the Masterpiece Theatre production about the tumultuous world that was unfolding under the power struggles and intrigue during the time of King Henry VII. Seemed like the appropriate thing to do for the holidays.