Skip to main content
Posted by Nicholas Vroman May 03, 2015

On the Road to Kawazu 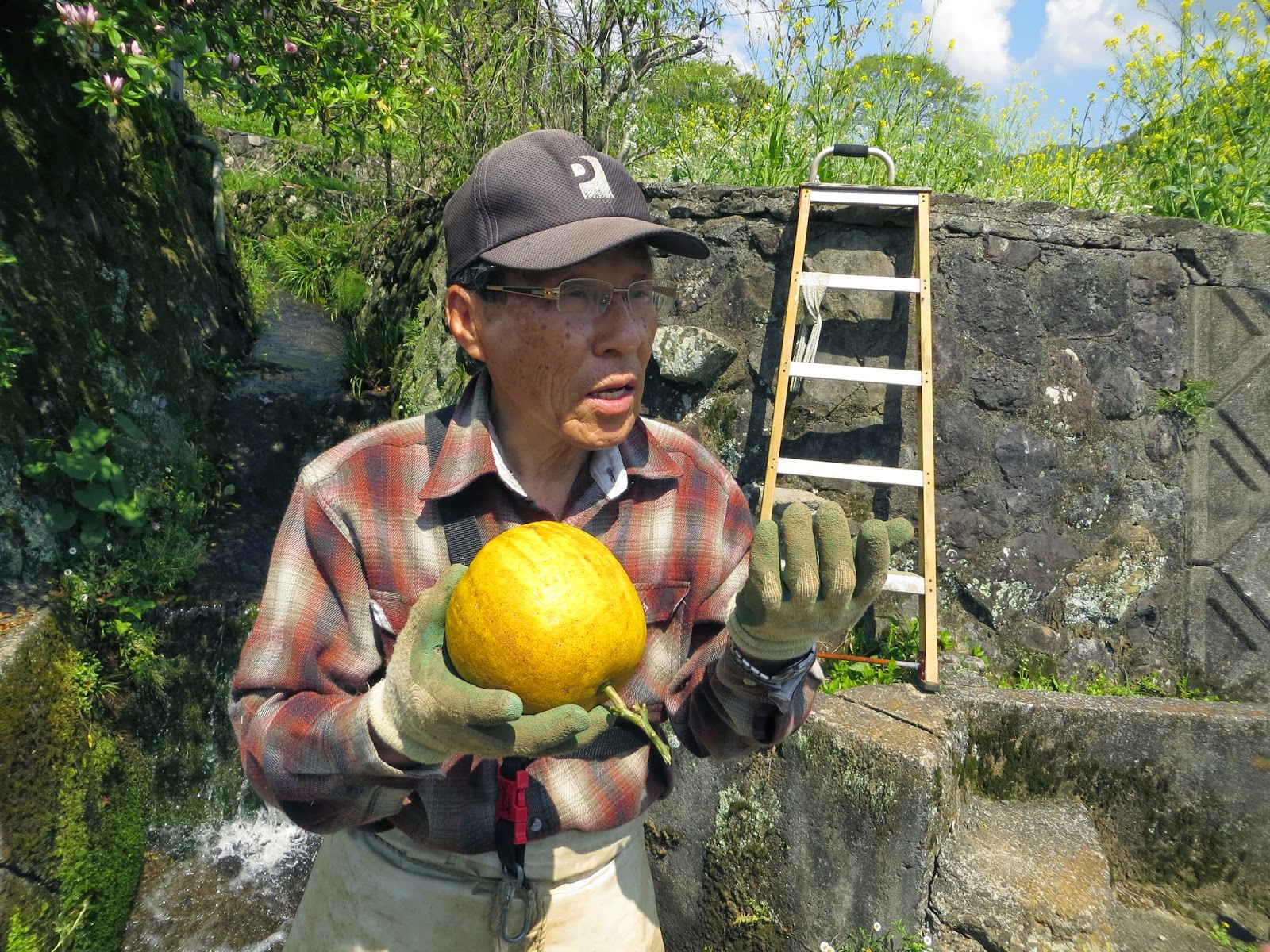 We were walking along a stretch of backroads that made up the old highway connecting Shimoda to Shuzenji - a pathway that snakes up and down valleys along the interior of the Izu peninsula. This was the road people traveled before trains and before Highway 135, which traverses the rocky coastline. We were following in the footsteps of the Izu dancer - the fictional object of obsession in Yasunari Kawabata's famous short story, Izu no odoriko.

We were walking alongside the narrow and tree-lined Kawazu River, when we came upon what appeared to be a completely oversized bridge being constructed. Gigantic slabs of concrete had been poured along the sides of a tiny tributary. A monstrous crane thrust up through the narrow channel.  Certainly overkill for this bit of back country. We veered away from the site and followed the river on a high path surrounded by small copses of bamboo and breezy trees. After about a half kilometer, the path opened up to a small road that cut across a low hill of terraced farms overlooking the town of Yugano.

There we came across a farmer, hoisting a fairly industrial-sized weed eater, perched above us, standing on the edge of concrete embankment, buzzing down a corner of wildflowers and unwanted greenery along the edge of a field. We exchange greetings, remarking on what a great day it was, and walked on a couple dozen meters to gander at the glorious view down the valley.

In a couple of moments, the yammering of the weed eater ceased. I turned to see the farmer motioning us, Japanese-style, with fingers waving down, to come back. He disappeared behind the tall stand of flowers. In a few moments he reappeared, hands full with four giant orange citrus fruits. He trundled down a small stepladder that leaned against the concrete wall and presented us with about 5 kilos worth of anseikans.

Anseikans are a pomelo variation hybridized by a couple of Japanese botanists during the Ansei era (1854-1860). They're big, thick-skinned, seedy, moderately sweet - but a bit more hassle than they're worth.

The gift was appreciated, though it meant packing extra weight. More important was the basic generosity and the moment of time, perhaps a welcome break for the farmer, to chat and share stories. He had worked driving a train up in Tokyo. Now he had settled into a bit of a pastoral life where timetables and schedules seemed to matter less.

We parted with our load and ambled up a nearby side road to catch a view of the valley from the neighborhood shrine. A fellow was taking a break from weed-eating the errant grasses on the path to the shrine with another guy who had been motoring through the neighborhood on his scooter. They were taking a smoke break. We had a little chat, and learned that a new highway was going to be built, just above the shrine, from there to Shimoda. About 5 kilometers away, along the coast, to the place that Highway 135 already goes.  Hence the bridge. So sayonara, peaceful valley. 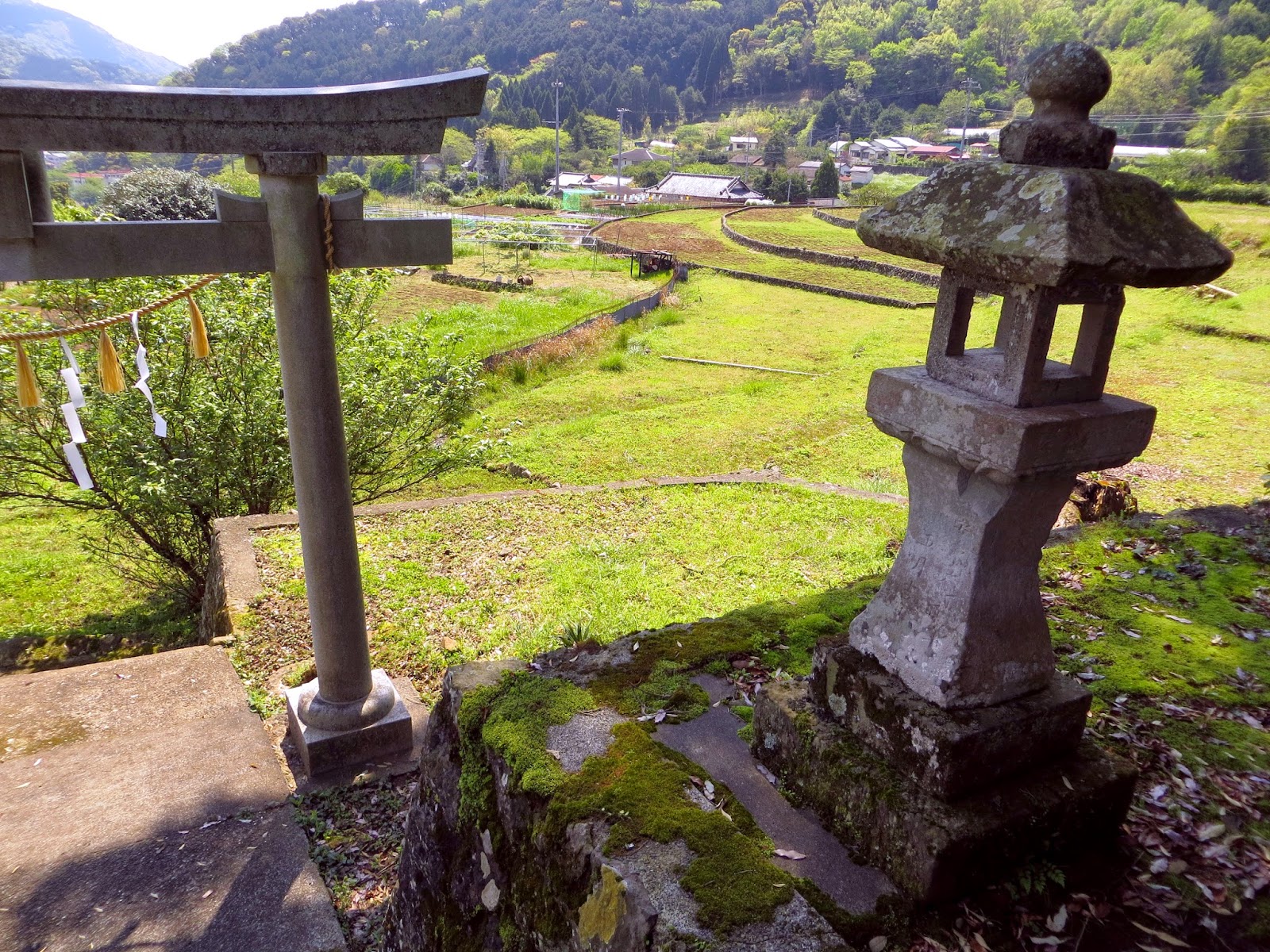