The Frogs of Yayoi 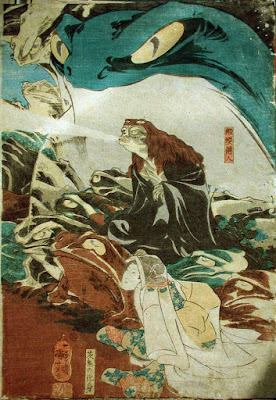 The Ajimi team has worked on and off at Todai University. This year, only one of the team makes his daily rounds to the old institution. The commute involves getting off at Nezu station and walking up a small hill toward the campus' Yayoi Gate. Once you get to the top of the hill, you hit a road just in front of a taxidermy shop that's been closed up for quite a while now. Time was the shutters were up on a window that had an array of stuffed small mammals and birds in absurd juxtaposition creating a surreal version of the peaceable kingdom. There was always a small rack in front of the door festooned with tanuki tails. Across the street from the shop is a fenced off section of the campus. Behind that fence are some small gardens and greenhouses. This time of year, tsuyu (the rainy season), the heat and humidity begin to rise. Not yet overbearing, it's the perfect time of year for frogs to come out and get a little frisky. The evening air fills with croaking. It's one of the rare places in the concrete and asphalt environs of Tokyo where you can hear a chorus of something non-human that's not machine. And a delightful chorus it is! The joyful chirpings of horny frogs breaks the monotony of passing cars. A small connection, a remembrance of the natural world breaks down, if only for a short while, the artificiality of the city. A small bit of the peaceable kingdom reigns in the heart of the urban jungle.

In the tradition of Basho, whose most famous haiku is about a frog, this Ajimi-ster wrote a haiku about the frogs of Yayoi. Like Basho's poem, which is pretty much untranslatable into English, mine is pretty much untranslatable into Japanese. The Zen-like conundrum of Basho's piece (What is the sound of water?) has managed to stump a who's who of English-writing poets. The double-entendre of my poem has no analog in Japanese.

And here are 31 translations of it.

Here's what the frogs inspired in me.

Across the roadway
from the taxidermy shop
dozens of frogs croak

Here's what they sound like (with the sound of passing cars breaking the rhythm).