The Ajimi team found a trio of komebukuro, which are decorative patchwork bags meant to carry rice as offerings to temples and shrines.  The lining of each bag was inscribed with the name of a man, Abe Sukezo;  his business, Abe Beikokusho (a rice shop); some dates, March and April 1915; and some vague addresses that didn't quite tell us where his stomping grounds were. Our conjectures about Abe-san's life and the bags themselves appeared in a previous post, History Embellished.

Friends who read Japanese better than we do set us straight on the place names - and helped us do some Google-sleuthing. Lo and behold, we found the neighborhood - even if we didn't find Abe-san's shop.

We now had two place names  to work with: Shirone and Ichinocho.

The pieces fell into place pretty quickly. Abe-san lived and worked in the city of Niigata in  Minami ward, about 7 or 8 kilometers from the city center. The neighborhood is a bit of a backwater, and was probably even more so a hundred years ago.

Ichinocho 1-chome was written on the linings of two bags and Inaricho 3-chome on the other.  These are two different blocks in the same general area.

The 1-chome address is largely occupied by a shrine. Did Abe-san write down the destination for the rice rather than his own address? 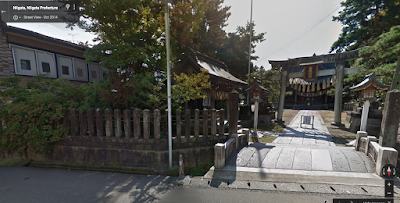 However, in 3-chome, a classic run-down block of mostly shuttered  businesses,  one building was identified on Google Maps as a rice shop. It's the one on the left, below. It appears to have been closed for some time. Was this Abe-san's place of business? 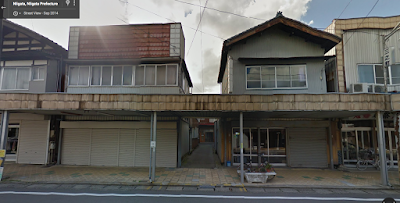 We did find, a short toss of a rice bag away, a genuine, old-fashioned, still-functioning rice shop associated with someone named Takahiro. We like to imagine Abe-san and his family had a place like this. 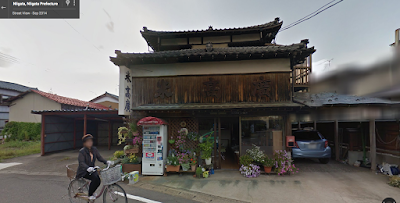 Here's a link to the neighborhood in Google Maps.  Please visit, and let us know what you find.