Omoshirogara (おもしろ柄) is a Japanese fabric tradition that flourished in the early part of the 20th century - and there's still a little bit of it going on now. It comes from the words "omoshiro"  (meaning interesting, fascinating, fun, amusing) and "gara" (pattern). It includes kid-oriented fabrics with images from old folk tales; fabrics commemorating historical events and sports firsts; and fabrics used as propaganda, celebrating battles and campaigns, often connecting ancient samurai culture and contemporary warfare, or just showing off the fleet and the armaments of a growing militaristic culture.

And there were a lot of fabrics celebrating modernity. By the end of the Meiji era (1912), through the Taisho (1912 - 1926) and beyond, Japan leapt into the brave new world of the 20th century. This tumultuous time was documented and commented upon in the arts, literature and design. 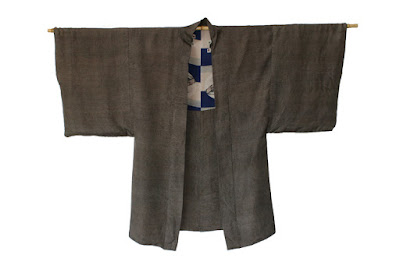 We came across this men's hanten, its lining patterned with images of trains, automobiles, cable tramway cars and planes. The illustration are fun and futuristic, celebrating an idea of a modern world that has long since past. But they also document a time and place where these aspects of a rapidly changing world were noted, commemorated and meant to be worn close to the heart.

At first we thought these illustrations seemed a bit generic - perhaps an artist's flight of fancy. But they were actually grounded in what was going on at the time. With a little sleuthing, we learned why these images were deemed important enough to print on a garment.

First up is an illustration of a train. It's a C55. These train engines were produced in Japan between 1934 and 1937. The trains were identified by the number on the front of the boiler. For this illustration, the artist took a bit of license and labeled it C55 86. Only 62 were ever produced. Nonetheless, this train, though still a steamer, was a leap forward in power and design. It could cruise along at a cool 90 kph. The last of them operated on regular runs until the mid-70s 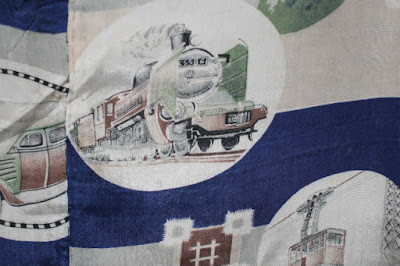 On the sleeve of this garment is another pattern - this one with dogs, kids toys and an image of a streamlined train. This "go stop train" illustration, again, is of a C55. Streamlined modernity hit Japan hard in the 1930s. C55 numbers 20 through 40 were fitted with deco features, a bit reminiscent of Raymond Loewey's magnificent streamlined locomotive of 1936. Loewy would come to Japan after the war and leave his indelible mark with the iconic package design of Peace cigarettes. 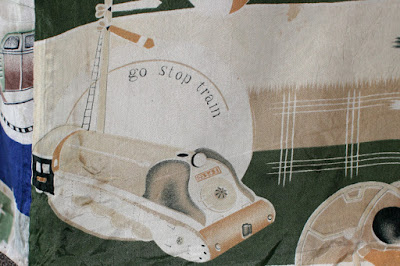 In the 1930s, cars, too, began to move from the flivvers of old to new streamlined designs. In 1936 Ford introduced its thoroughly modern Lincoln Zephyr. But more importantly, De Soto started manufacturing its Airflow in 1934. Its look was pretty revolutionary. The designers at Toyota took a good hard look at it and in 1936 came up with the Toyota AA, from the outside almost an exact copy. Here, the illustrator seems to be copying an Airflow, but it's awful close to a Toyota AA. 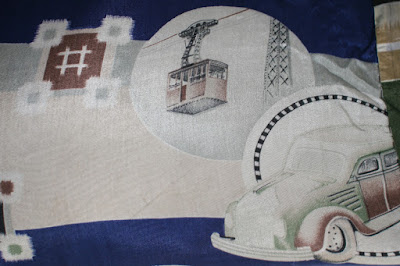 And finally, there's an illustration of the China Clipper, which Pan Am introduced for the first trans-Pacific air mail service (from San Francisco to Manila) in 1934. Though the Clipper didn't stop in Japan, it was the harbinger of a faster, more connected world, that would soon reach its apogee, only to run headlong into the disruption of World War II. But the advances made during wartime, in the massive transport of people and materials, would morph soon after the war into the transport of business people and vacationers. 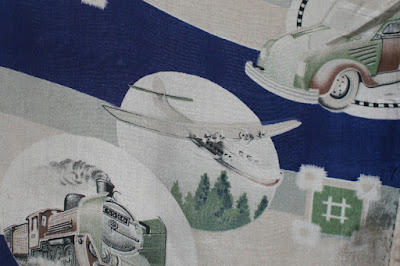 Every picture tells a story and serves as a window into a particular time. This time - 1936. The promise of progress would soon be undone by the horrors of World War II. In this fabric are images of the best,  coolest and most modern transportation of the particular world that was Japan at that time. Trains, cars, planes. Things that connect the world becoming more efficient, looking more beautiful, speaking to a better world tomorrow.