It all started with the glass. Wandering through the web, I came across this 1940s advert (see above) for Martini & Rossi Vermouth. Forget about the exhortation to "Be one of the Crowd and be Moderate too!" It was the glass.  The squared lip, the graceful foot - a gentle pinchable pedestal for an ample (or was it Moderate?) pour. And at $2.00 a dozen - a true bargain.
A closer look at the copy revealed that it was designed by Count Theo Rossi. No doubt, one of the Rossi family. And a count no less! Some further research was necessary.
The venerable vermouth company, Martini & Rossi, was started in Torino by businessman Alessandro Martini, accountant Teofilo Sola, and the guy with the recipe, Luigi Rossi. By 1892, Luigi and his sons had taken over the business, though they kept Martini's name on the label. By the 1930s, the biz had been passed down to the grandsons.
Count Teofilo "Theo" Guiscardo Rossi di Montelera was quite the man about the world - bob-sledder in the 1932 Lake Placid Olympics, champion power boat racer by the late 1930s. Martini & Rossi continues to support and brand itself with car and boat racing to this day. He even flew on the maiden flight of the California Clipper from San Francisco to Honolulu. The WWII years saw him missing in action. But he comes back on the radar in the 50s and 60s, with a leading role in the international jet set, chumming up - and popping up in photos - with likes of the Aga Khan, Orson Welles, Maria Callas, and more importantly, Salvador Dali, of whom he became a benefactor. Dali rewarded him with a portrait which has made Theo a minor surrealist celebrity and given him some internet recognition. 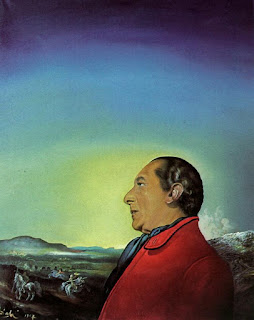 The Duke of Urbino. Portrait of Count Theo Rossi Di Montelera
Salvador Dali, 1957
But I'm still jonesing for those vermouth glasses, which I consider his greatest legacy. My obsessive internet search for them has come up goose eggs. Did he really design them? And were they ever manufactured? If so, where can I get some? If you got a line on some, drop me a line. I have a special bottle waiting.
- NV
Labels: vermouth wine