Ghost Ingredient in the House of Vermouth - Caperitif 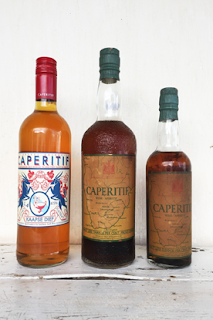 There's a ghost in my house
A ghost of your memory
A ghost of the love that was took from me
Ghost in my house...
- Holland, Dozier, Holland
The relaunching of South Africa’s Caperitif has been something of a bombshell in the rarified world of aromatized wine news. To make the long story short, in some classic cocktail bibles, particularly Henry Craddock’s 1930 Savoy Cocktail Book, mention is made of Caperitif as key ingredient for a few libations. Cut to the contemporary cocktail revival and the ghost ingredient is nowhere to be found, existing merely as a forgotten reference in old manuscripts. Then somewhere in the 2010s, Danish gastro/cultural pioneer and mixologist Lars Erik Lyndgaard Schmidt reached out to cutting-edge South African winemaker, Adi Badenhorst, to see if they could recreate this phantom vermouth. 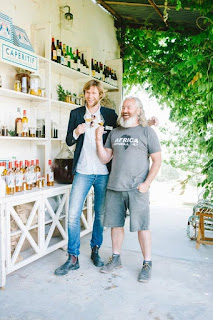 Fact is, nobody living could remember what it tasted like. It seems that by at very latest, the 1940s, Caperitif had disappeared. For what it’s worth, there are several sites/references that place the end of Caperitif somewhere around 1910. However, the fact that Craddock’s first edition cocktail manual did not appear until 1930 makes one think that it was still available in London at that time. I’m thinkin’ the early 40s, considering the German naval activity in the seas around Great Britain and the collapse of the South African wine industry a cause de la guerre mondiale. The true history of what happened to the Castle Wine and Spirits Company, the original company that produced Caperitif is certainly lost to the internet, but probably is readily researchable in libraries and archives in South Africa.
So what the hell is Caperitif? Even if we have no fuckin’ clue about how it tasted?
Well, with its new iteration it’s a Chenin Blanc-based wine (good start!), bittered with chinchona/quinine (keep it goin’!), and aromatized with a slew of indigenous South African botanicals (even better!). And beyond that, each batch has a different flavor profile, as the current recipe is still a work in progress (yay!) that is reaching what sort of end? Recreating the original is not on Adi Badenhorst’s mind. He’s taking a concept and reinterpreting the whole thing into a lively and living new vermouth thing, which simultaneously invokes and denies the phantoms haunting our present. Let sleeping ghosts lie – and let’s drink to them!
To put it in a nutshell, though, Helen Sheridan, niggie/coordinator/negotiant for Caperitif says, “We're mostly just inspired by the cool story of the original. And have been playing with local aromatics so unique to the Cape Floral Kingdom (and obviously trying our product in many of the old Savoy recipes to see if it tastes good...)”
Those local aromatics include a host of wonderful botanicals with great local names, among them kalmoes/ calamus (Acorus calamus), wilde als/African wormwood (Artemisia afra), konfettibos (Coleonema pulchrum), rooibos (Aspalathus linearis), buchu (Agathosma betulina ), sour fig/suurvy/Hottentot fig (Carpobrotus acinaciformis), naartjies/satsumas (Citrus unshiu), appelliefie/cape gooseberries (Physalis peruviana), which are not rally gooseberries, and kei apples (Dovyalis caffra), not really apples. I mean, how wonderful a whacky combination is that? Plus, they add a mess of other botanicals and spices that are traditionally used in vermouths.
The world of aromatized wine is ever expanding. It’s a new world. We will never find Hippocrates' original herbed wine recipe. And we will most likely never know exactly how the original Caperitif was made. Two bottles of what appear to be the last 3 remaining original Caperitif have been purchased by the Badenhorst winery. They still remain unopened. And who knows? Perhaps a secret cache may be hidden in some forgotten corner, maybe on the fifth floor of London’s Savoy Hotel. Seems an appropriate place for a ghost ingredient to haunt.
http://caperitif.com/
http://www.lars-erik.org/
NV
Labels: Caperitif Savoy Hotel South Africa vermouth wine