It was just about 8 years ago that I visited Japan for the first time. I had fallen in love with a building -- Rafael Vinoly's Tokyo International Forum -- and wanted to check out both the building and the city where it was built. After a couple of months of searching I came across a ridiculously cheap airfare and, with my mother's 75th birthday looming, invited her to join me for 10 days in Tokyo and Kyoto.

Dorothy had always been an excellent traveling companion. We had visited Italy, England and Mexico together. She was the kind of traveler who was up for anything, approaching each new horizon with a sense of adventure. Our budget for the Japan trip was tight. Aside from the first few nights at the lovely Ryokan Shigetsu in Asakusa, we roughed it in cheap lodgings. Dorothy gamely hoofed it up and down subway stairs, often with the aid of a cane. But she endured the hard walking and lack of luxury, propelled by the desire to see everything. 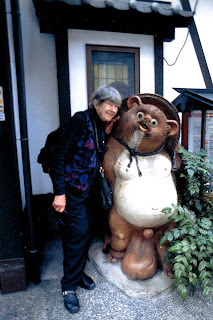 On that trip we developed a shared love of tanukis, an animal indigenous to Japan that over the centuries has become mythologized into a party-loving, shape-shifting, impecunious rascal and the patron deity of actors and lovers of the bottle. The dictionary defines them as "raccoon dogs" and they are renowned for having some of the biggest balls in the animal kingdom. There are tanuki statues all over Japan, often outside izakaya and restaurants. Dorothy in particular took a shine to these statues and whenever she saw one would make a note of what was going on below the waist.

Dorothy died a year ago today. The trip to Japan was the last one she would ever take. Her eyes went first, then her knees, limiting her horizons to a few square yards in a small apartment. Cancer came next and, although it was beaten back with drugs and radiation, ultimately it was she who was beaten. Today we will visit a small shrine in Asakusa that Dorothy and I visited for the first time together. There we will light a candle and give her regards to the tanukis.

J said…
Sorry to hear about your mother's passing Virginia. This was beautifully written and really gave us a sense of Dorothy's fun-loving spirit. May she rest in peace.
August 24, 2008 at 3:18 PM