We Got the Beets 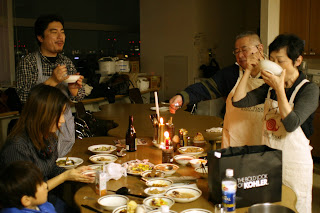 A few years ago, my then-neighbor Adrienne bought a juicer and began making juice out of everything she could lay her hands on: garlic, carrots, apples, ginger, celery, spinach...all were drawn into the vortex. But one vegetable eluded her: beets. It seemed that she could not find a beet anywhere in Tokyo, at any price. I had not given much thought to beets in many years but began to keep a sharp eye out for them whenever I went shopping. And, indeed, beets were nowhere to be found. A few months ago we did spot some at the Kinokuniya supermarket in the basement of the Bunkamura building in Shibuya...puny things for about 3 bucks each! We wrote beets off and moved on.

But Christmas is the season of miracles. On Friday night we attended a bonenkai party where we met Alex the Russian. Nick's first question: where the heck do you find beets in this town? Alex scores his -- affordably -- at the OK Market near Yoyogi Uehara station. He even makes a sweet liquor infusion out of them. But then, the following night, we attended a Slow Food party at the Shinjuku Kumin Center and what to our wondering eyes should appear but a boiling cauldron of home-made borscht! Synchronicity! One of the organizers, Noriko, orders her beets from a food co-op and the resulting soup was served with fresh cream and yogurt. The borscht had a special Japanese touch: a dash of Awamori, high-octane Okinawan rice liquor, to give it a special zing.

The party was a very yummy affair with guest foodies from 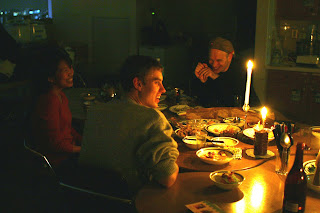 all over Japan. We met Narita-san, a master soba maker from Tokyo; Meero-san, an international food consultant from Hokkaido; seed savers from Osaka; and Masu, who throws monthly fruit, music and art parties in Aoyama (reservations in English and Japanese at fruitsparty@gmail.com). Most of the guests had arrived before noon and spent the day cooking together in the well-outfitted kitchen-cum- function room overlooking Shinjuku Gyoen. We dined by candlelight with the lights of Shinjuku glowing in the distance. As we left around 9 pm, people were still arriving to share food and comradeship. We received a large, lovely beet as an early Christmas present.