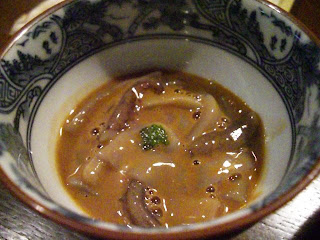 It's a typical Friday night in an typical neighborhood izakaya. The man next to me asks if I like sushi. He acts genuinely surprised when I say yes. He asks about natto  (musty tasting, gluey fermented soybeans).
I say, "it's OK, but I wouldn't go out of my way for it."

I answer the same, having spent a week last February accidently ordering it in restaurants over several days and finding it not so unpleasant.

He hopes to catch me. "What do you think of shiokara (salt pickled squid, guts and all)?"

Japanese rightfully pride themselves on the amazing permutations and variations of their cuisine. From many a Japanese point of view, a measure of cultural difference is the stuff they eat. Quite often, among less worldly folks here, there is an assumption that only Japanese like - and can eat - Japanese food. What makes the outsider truly different is that they will never like the food from their world. And the litmus test is how the outsider reacts to the ostensibly difficult foods - from the raw, to the sticky and slimy, to the obscure, and to the fetid.

When the Ajimi team first began flirting, a true "ah ha, this is a woman who can rock my world" moment came in a missive in which Virginia stated "we will sing for our supper at a local Japanese restaurant (try the fish innards)." A complex and brilliant seduction was underway. Appealing to our mutual desires of making music and being in the spotlight together opened up a door. But fish innards were a key to my heart and soul. I soon flew from Seattle to Japan to spend some time with this woman whose taste for culinary adventure was boundless. Our first night together in Japan took us to what would become a favorite restaurant, Kawacho. At this small, neighborhood joint hidden on a back street in Bakurocho, we ordered a small plate of house-made shiokara. As I offered the first taste to Virginia, she declined, saying she actually really didn't like the stuff. At least she had tried it before.

The rough handmade dish complimented the silky bands of squid. A beautiful mahogany colored sauce caressed the off-pink strips of perfect briny cephalopod. I picked up a glistening bit of squid in my chopsticks. The moment had finally come. I ate my first bite of shiokara.

It was awful. It was just how one might expect several days-old squid to taste - sour, rubbery, rotten.

Two years have nearly passed since our first outing in Japan. Since that time I've had the opportunity to eat shirokara often. It's a recommended snack to compliment one's sake. As time has passed, I've actually grown to like it. At a recent Slow Food dinner several bowls of potatoes slathered in shiokara appeared. They were great.

I turn to the man in the typical neighborhood izakaya. "Actually, I really like shiokara."

He looks at me quizically, then lets out a hearty laugh. We toast to our mutual likes. Virginia joins in, though she passes on the shiokara.

If you want to make your own shiokara there's a recipe at this link.
NV
Labels: Food