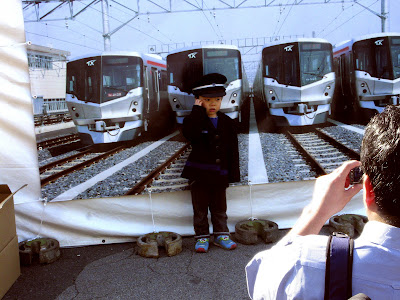 There are times, particularly when the weather is dull and rainy, as it was in the days leading up to last Thursday's typhoon, when Tokyo feels like an obstacle course. Its 12 million or so inhabitants are channeled into the same tunnels and concourses, the same steaming trains, and their sole purpose seems to be to keep you from getting where you want to go. But these past few post-typhoon days have been glorious, sunny and crisp, and Tokyo has once again opened up, ours to explore, our fellow residents becoming objects of wonder.

On Saturday we decided to head to Hibiya to visit both the Japan Sake Brewers' Association and the park where we thought there was a Kyushu food festival going on. The sake brewers are located in an architectural desert around Toranomon between the fortified enclaves of the national government and the glitz of Ginza. The district is one of the few in Tokyo where the street pattern resembles a grid and it represents the triumph of efficiency over charm. The only human presence in non-business hours is the odd septugenarian moonlighting security guard. It would be a terrible place in which to be attacked by a pack of zombies but you can totally imagine it happening. Unfortunately, the JSBA was closed for the weekend but through the window we could see row upon row of nihonshu bottles as well as dusty dioramas depicting the sake-brewing process. If there's anything the Ajimi Team loves more than booze it's dioramas so we vowed to return. And off we went to Hibiya Park. 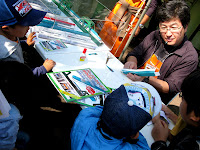 It turned out that the Kyushu festival was happening elsewhere. Instead, we followed the sound of an old-fashioned steam whistle to the 16th annual Railroad Festival. All the lively quirkiness that Toranomon lacked could be found in the surrounding few hectares of the park. 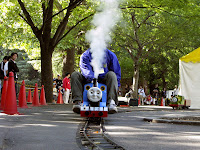 None of those kinds of things were on display at the railroad festival but it seemed that very little else had been left unmarketed. There were booths for 20 or more local and national train lines. They were selling old tickets, calendars, route maps, t-shirts, water bottles, key chains, train models, mascot stuffed animals, ekiben - the generally semi-edible lunch boxes sold at many stations, schedules, towels, socks. One booth even had a couple of rusty valves on offer. The free attractions included a wee Thomas the Tank Engine ride powered by a real steam engine (the source of the train whistle) that hauled kids and grownups around an oval track. It was also a rich environment for people-watching. One large, round 20-something lad, his waistband hiked up to just under his armpits, was marching around murmuring the names of the stops along the Yamanote Line into his clenched fist, perhaps living out a lifelong train conductor fantasy. No one batted an eye. 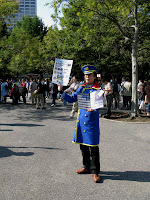 There were things of interest for people like us, too, you know, normal people. The Ajimi Team are suckers for "Showa retro" images of old Tokyo so we hung around the stands screening images of long-dead subway riders and vanished tram lines. We also loved the exhibit of Japan's historic wooden train stations, the subject of a recent NHK documentary series. We do love trains, just not in THAT way.