Literally. It tastes like ass because it is ass. 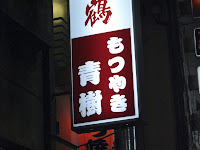 Exploring the dining options - there are many - on the blocks fanning out from the Kurasumori Exit of Shimbashi Station, the Ajimi team came upon a little izakaya, Aoki (青樹). The owner, Aoki himself, a small, tightly built man harangued us with his bare rasp of a disappearing voice to set on down and have a heapin' helpin' of his hospitality.
Aoki's xeroxed menu highlighted a mess of bargain drinks, some of the usual yaki suspects and its main claim to fame, motsu. Motsu being innards - liver, tripe, gizzards and more - the unknown and forbidden animal parts that most Americans would throw away in a heartbeat. That is if they even had the option of throwing it away. It's often difficult to even find liver in the meat department of a US grocery store these days.
Feeling intrepid... well, perhaps we had had a few to drink before landing on the stools outside of Aoki... we decided to order something we've never tried before. There were many never-before seen words on the menu, so a random choice led to teppou (テッポー). When quizzed as to what it was, the waitress pointed vaguely "down there" and with a giggle confirmed that it was very tasty indeed.
A beer later, the plate of teppou arrived. A couple of skewers with squares of gray-white meat stuff, lightly bronzed by the grill. All in all, it didn't look bad. I offered a piece to the wiser member of the Ajimi team, who chose to demur. 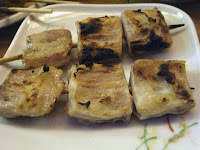 The first bite - tough. The second - tougher still. Several chews into the unknown organ meat and it seemed to be getting tougher and more rubbery with each mastication. Plus, to confound matters, a not too pleasant outer layer of fibrous material seemed to be getting more straw-like as it seemed to cling harder and harder to the layer of rubber it adhered to. Imagine a bicycle tire, cut into pieces, bleached white and laid to the flame.
But I can say that it probably didn't taste quite as good as burnt bicycle tires. As teeth crushed tissue a sort of pork-funkiness squirted forth that soon began reacting on those little glands at back of the mouth above the throat that emit an acrid sourness in times of danger. You know, the ones that signal its time to vomit. Now I like my pork as funky as any swine lover does. And in the immortal words of George Clinton - "you gotta funk yo' butt." But this pork/funk/butt axis definitely tasted a bit evil.
I managed to choke the thing down and foolishly tried a second piece. 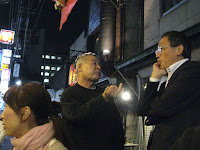 I signaled to Aoki-san and queried "OK, what animal part is this?" He grabbed me by the hand, brought me to a poster from the Japan Livestock Industry Association and gleefully pointed to a picture of unidentifiable roadkill labled chokuchou (チョクチョウ), yet another name for the unmentionable body part that lies south of the intestines but barely north of the anus. Still in some denial, yet fearing the worst, we looked it up in our electronic dictionary only to confirm the obvious.
At least now, whenever I say "it tastes like ass!" I will be speaking with some authority.
The website for Aoki is here - http://mo2aoki.hp.infoseek.co.jp/