Found: The Worst Cocktail in the World. 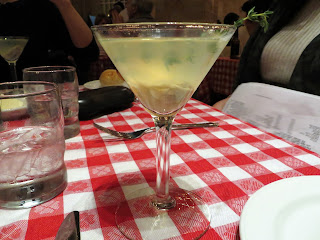 OK, admittedly, the Ajimi team was not at their most bright-eyed and bushy-tailed after a long and really boring flight from Tokyo to NYC. But when we finally saw the Empire State Building - all lit up like a Christmas tree - our second wind came as we whooshed down 6th Avenue to meet up with our friends, Kiyo and Peter. We wanted to eat oysters! That's all we wanted to do. So, uptown to the most touristy, most New Yorky of all places, the Grand Central Oyster Bar.

It's a tradition for the Ajimi team, whenever hitting US soil, to go directly to someplace that has raw oysters.

We settled into the bustling place. The experience was classic old New York. Serving us were some of the most inept and rude older waitstaff, whose asses were covered by younger, hungrier, nicer, more professional workers. One of the  younger guys came by to start things off. Kiyo and the more flighty Ajimi teamster, caught  a bit off-guard, perhaps just relishing the whole silliness of the experience, or caught up in the magic of the moment, ordered the special oystertini - a vodka martini with a raw oyster plunked in it, a bit of oyster nectar to replace the vermouth, with a rosemary  garnish. What were we thinking? More to the point, what were the bartenders at the Oyster Bar thinking?

The worst cocktail in the world!

The server arrived with the drinks in question, and with a flourish served us the vaguely gray-green concoctions that we ordered. The sprightly sprig of rosemary added another layer of green to the brackish viridescence of the drink. It was one way wet and spectacularly dirty martini. Whatever cleanish vodka edge we expected to accentuate the brine of the oyster was lost in the murky tide-poolish taste that washed over our taste buds at our first sips. Now I like tide pools as much as anyone. But I don't like to drink them. The piney taste and usually enchanting fragrance of the rosemary added only a bit of nausea-inducing headiness to the already awful misconception of a cocktail. Perhaps if it were something like a roast lamb-tini, the rosemary would have been a wonderful accompaniment.

I sucked down the thing as quickly as I could, choking down the anesthetized bivalve lying dead at the bottom of the glass and ordered a yummy beer, which went perfectly to the oyster feast that would soon follow. Hog Islands from Rhode Island and Caraquets from New Brunswick were just a few standouts from a wide selection of East Coast oysters that chose. Plus a couple raw littleneck clams reaffirmed that we were genuinely in New York City and banished, for the moment, the memory of that poor little oyster drowned in alcohol. 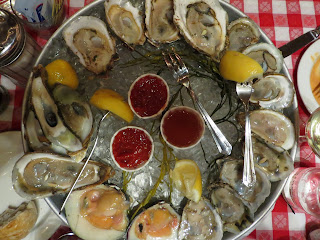