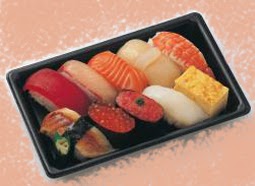 Above is a pic of an average sushi tray from a big chain hereabouts, Chiyoda Sushi. This is their chiyo ori ou gi (chiyo mystery box) selection. It costs 690 yen. There might be some changes as to what you get depending on the season, but most likely not. This is pretty standard fare - all year - these days, when you pop into the shop after a long day at work and you just want something to scarf down with a cold beer.

Here's what you get.

Top left, maguro (bluefin tuna) - unsustainable. In the wild it's being overfished. And when it is fished, there's often a lot of bycatch - things like sea turtles and sharks that just get thrown away. There are other bluefins that are being "ranched" off the coast of Mexico in ecologically unsound ways. Monterey Bay Aquarium Seafood Watch says "Consumers should "Avoid" all bluefin tuna." If you were to eat this morsel, you might accidentally be doing the right thing, because a lot of maguro being marketed in Japan these days is actually not real maguro. It's often some other kind of tuna. Did you know that by putting your basic tuna flesh in a CO2 environment it will turn deep red? But if you're hell-bent on eating up the last of great bluefins, you may be disappointed in that the stuff that's hitting the bottom of the food chain (places like Chiyoda Sushi) is often pretty bad quality. But, on the other hand, it's probably got all those PCBs and mercury that your body's been craving.

Top, second from left, buri (Japanese amberjack or yellowtail) - unsustainable. I personally like buri. It's mild, meaty and toothsome. However, almost all of it comes from fish farms on the inland sea. Their feed is made from inordinate amount of wild-caught fish and and there are serious concerns around water pollution and parasites. I think I'll pass. I suggest you do too.

Top, center, salmon - unsustainable. Yep, farm-raised salmon, either from the Atlantic, off of Chile or New Zealand. Everyone knows not to eat this stuff. It doesn't even taste like salmon.

Top right, ebi (shrimp) - flip a coin. There's a chance that this baby may be sustainable, caught or farmed in local waters, but I wouldn't count on it. There's a mess o' shrimp being imported from Southeast Asian waters - mainly Thailand - that (not to blame the shrimp themselves) are being raised in open farms that just kinda pollute everything around them. Plus, mangrove forests are disappearing as shrimp farms take over the coastline. There is such a thing as sustainable shrimp farming, but you'll never find out where this one came from. Oh, and the mealy overboiled specimen from Chiyoda may make you pause before eating.

Bottom left, anago (sea eel) - the verdict's still out. As you should know, don't eat the unagi (fresh water  eel). They're farmed in horrific conditions and their "seed" - baby elvers - are taken from regular spawning grounds without being given any chance to replace existing populations. As for sea eels, scientists just don't know enough yet. So, ya takes yer chances. Good luck, sea eels!

Bottom, second from left, ikura (salmon roe) - depends. If your roe comes from some good Pacific salmon, it's OK. If it's from Atlantic farmed salmon, just don't even think about eating it. Of course, you never know, but at a low-budget place like this, assume the worst.

Bottom center, negitoro (tuna belly chopped with Japanese leek) - ?  Could be it's made from leftover maguro, could be from lesser and more sustainable tuna species. They'll say it's from the best, in which case, don't eat it.

Bottom, second from right, ika (squid) - who knows? After all, it's a humble squid. But news is that the stuff from Thailand is way up there in the unsustainability ladder. And again, who knows where this one's from. However, the soapy taste and the chewy mouthfeel of cheap raw squid is an acquired taste at best. Mmm!

Bottom right, tamago (Japanese omlette) - eat it up. It's safe and sure - even if it is a little dull.

All references regarding the sustainability of the fish in question are from Seafood Watch - http://www.seafoodwatch.org/