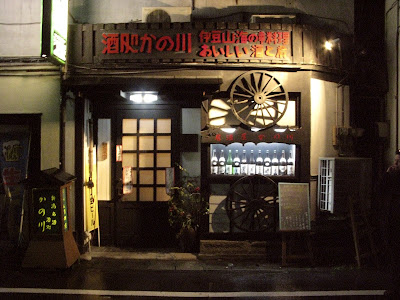 When going anyplace in the world, the Ajimi team always does a bit of advance research on local foods, booze, tourist attractions and the like. Shimoda is all about promoting all the Admiral Perry stuff, the Okichi - Townsend story, the onsen, but generally leaves its cuisine to the imagination. Unlike many Japanese towns, promoting either the best noodles in Japan or the best local fish (no doubt shipped from the Tsukiji fish market in Tokyo) the tourist literature on Shimoda tends to underplay the local dining options. This is all a bit surprising, because Shimoda actually still has the remains of a local fishing industry, kelp and seaweed beds, and a working waterfront where the locals spend lazy mornings fishing for iwashi (鰯) or whatever else may be swimming by. Plus they have a few blocks of the small town devoted to the himono (干物) - dried fish - business. When the Ajimi team popped into town on a perfect off-season day, the old heart of town had many local businesses with racks of drying cuttlefish and sardines spilling into the streets catching the sun and salty air of this famous little port.
Of course with the proximity of the wide Pacific we queried the local tourist office on where to partake of the local catch. A false start brought us to a decent but ultimately unmemorable restaurant. The second night, Friday, braving rain and wind, we hit the empty streets looking amongst the few open places for something local and delectable. And find it we did!
We noted an unassuming storefront, classically funky Japanese-style izakaya during our afternoon walk. It was one of those places that can be a true risk, perhaps gawdawful, or maybe at best acceptable, but Kanogawa (かの川) had the advantage of a posted menu describing a list of fare that we a) had never tasted in our lives and b) we were completely unfamiliar with. Always a good sign. 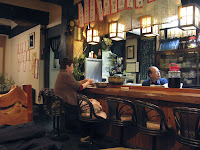 Sliding open the front door revealed a warm wooden room modestly outfitted with 3 tables, a small irori (open hearth) dining area and a small bar with seats for about 6 people. Sitting at the bar was the woman of the house busying herself with cleaning seaweed. Her husband sat behind the counter, watching the TV set high above the dishware-cluttered back bar. He, also, when not glancing at the tube, was attending to a large bunch of seaweed. We were their only guests the entire evening.
We asked for some local sake and were informed that there really was none, or at least none worth serving, but happily, the masters of the house were true sake lovers and had chosen about a dozen bottles, mostly from the Niigata region, to highlight the fare that came from their humble kitchen. Our hostess was more than enthusiastic in describing some favorite nihonshus, so leaving ourselves in her hands the sake poured and the feast began. 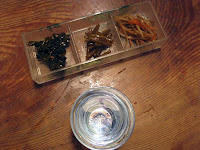 We started off with the most brilliant of otoushi. A long glass box with 3 compartments featured a classic gobo and carrot salad, vinegar-cured wasabi shoots, and an intriguing seaweed that was gathered that morning. In fact, the piles of seaweed that they were cleaning was the very stuff itself. We had never had anything quite like it. Not quite as strong as cured konbu, but not as delicate or silky as a wakame, this seaweed had a beautiful brinyness, a whisper of smoke and a satisfying tooth - just enough to give it a soft crunch. The wasabi shoots had a touch of heat, but none of the acridness that wasabi can sometimes smack you with. The vinegar was puckery and demanded a sip of sake to tame it. We followed that with three little tokubushi (常節) - small abalones. And in great Japanese style, the little critter was served up whole, not just the foot. The faint muskiness and softness of the innards complimented the fresh chewiness of the perfectly cooked foot. After that, a small selection of bite-sized miso-cured iwashi himono. These little sundried sardines still had a bit of moisture in them, their already oily tastiness intensified by the sun and sea air. 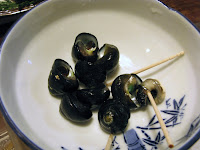 Next came some local turban shell sea snails - sazae (栄螺) - which in the local parlance are called maimai - small blue shells where we pricked off the hard estivate and corkscrewed the tender flesh out with toothpicks.
We then ordered some locally caught kinmedai (金目鯛) as a nimono (煮物), a simmered dish. 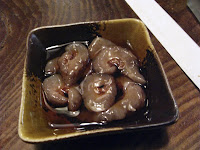 As it took a bit to cook, our hostess brought out a little bowl of namoko (海鼠) - little bits of sea cucumber. We had seen these odd creatures in fish shops but had yet to try them. We were greeted with a light sea-y taste and an amazing texture. A rubbery toothiness turned immediately into a sort of nothingness, or rather liquid state at each bite. This relative of the sea urchin is apparently under close scrutiny from bioengineers for its ability to turn its tissue from solid to liquid and back again. There's nothing in the world quite like it. 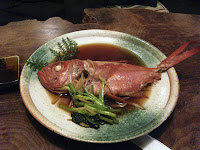 The kinmedai arrived - a whole fish, red with a big eye staring at us, laying in a puddle of shoyu. We picked at the mildly sweet flesh, drank our last of several rounds of sake for a perfect end to the eating portion of our experience.
And then it was time for dessert.
We had noticed several large glass jugs of mysterious infusions behind the bar. In the best of izakaya traditions, Kanogawa makes their own fruit infusions. The classic is umeshu (梅酒), made from local Japanese "plums." In June every year, many bars and households put up this fruit in shochu. The Ajimi team is no different: our first batch is resting on the back of a low shelf awaiting its 1st anniversary in June 2009. Kanogawa, however, in addition to umeshu had several other fruit liquors on hand. We had a sampling, on the rocks with a splash of soda, of local yamamomoshu(山桃酒 - mountain bayberry) - delicate, with a slight astringency to its basic sweetness - and yamabudoushu (山葡萄酒 - mountain grape )- slightly more robust, with a touch of grapey funkiness. 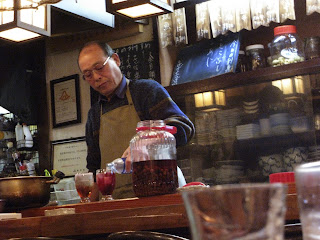 Kanogawa is not exactly a rare find, but an important one. In a country, or rather a world, where tradition and localness have become brands - controlled and tailored to create a homogenous "experience", its always wonderful to stumble into the unhyped, unhurried and exceptional places that honestly do carry on local traditions and allow experience to become an adventure.