What's That You Say? 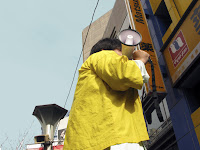 The aural landscape of Japan offers many pleasures and many annoyances. Between the big black trucks trundling down Yasukunidori, broadcasting nationalist anthems and sloganeering at top volume and the general din of overcrowded urban spaces, one recognizes that contrary to the stereotypic notion of Japan being a nation of silence and contemplation, the reality is that it can be really LOUD here. When hackles aren't being raised from the general noise pollution, the Ajimi team often finds mixed pleasure - amusement tempered by amazement before forefingers unconsciously find their way into ears - in the sounds of Japan.
Among the more interesting phenomena is the hawking of products by yelling.  The most egregious must be Yodabashi, the giant vendor of all things electrical, photographic, laundromatic and gadget-errific. Take for example, the flagship store in Akihabara. Outside said store, there will be several workers shouting through megaphones about sale items. Upon entering the store, one will find more people shouting, either through acoustic or electric bullhorns, adding to the din of customers talking, and the incessant PA playing the Yodabashi theme song - a variation on the Battle Hymn of the Republic. Then, in particular sections of the store, a voice will break in over the  theme song, yelling about this or that item on sale. The din becomes overwhelming. The message is always lost.
Perhaps the most amusing are the poor workers sent out to the sidewalk with small plastic or paper megaphones. A shift of yelling oneself hoarse unintelligibly to unfazed passersby must do wonders for self-esteem and doing a meaningful day of work. But these  young workers are often relentlessly enthusiastic. Perhaps the act of doing - and doing enthusiastically and well - is reward enough. Perhaps being in the center of, and being part of a loud (think rock concert or rave) public event every day gives the hawker a pure dopamine rush.  We hope it makes up for the minimum wage. Or maybe it's just a bad cultural habit.
Recently we were in Kawagoe where we observed this young hawker hiding behind his prop. Note that the product is manju for only 10 yen. IT'S A BARGAIN!
NV
Labels: Culture