Searching for a taste of the sea

South of Tokyo the Pacific seashore is mostly encased in concrete. This 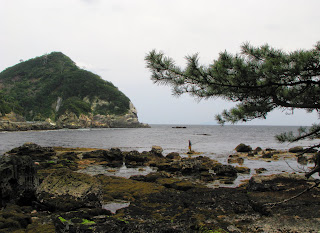 concrete was ostensibly poured to control erosion, but, along with massive dam projects, river channelization, and the general de-naturing of many of the country’s once wild and beautiful places, the disfigurement of Japan’s seacoast has mainly served to stave off erosion of the national public works budget. Thus, one has to travel several hours by train from the metropolis to find a relatively unspoiled stretch of ocean.

Eager for some contact with the Pacific, we headed for the Izu peninsula. At its northern end, the spa town of Atami is another testament to overbuilding. The highrise hotels and endless crowded shopping streets -- not mention a storied red-light district -- have managed to obliterate whatever natural features might have attracted visitors there in the first place. But head farther south along the eastern coast and the towns become smaller, the buildings shorter, the views of unspoiled seashore more frequent. By the time you reach Shimoda, it is possible to imagine what life in that part of Japan might have been like 150 years ago.

In Shimoda, making you imagine the historic past is the main tourist 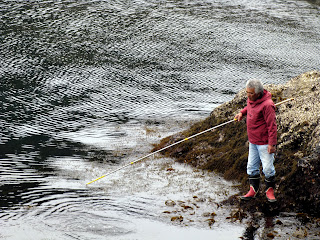 ic purpose. It was here, in 1853, that the Black Ships (kurofune – 黒船 – in Japanese), a fleet of American vessels led by Admiral Matthew Perry, sailed into port, the key event in opening Japan to American influence. The Kurofune/Perry theme is omnipresent. So is the story of Townsend Harris, the first US consul to Japan, and the Japanese maiden Okichi. The most romantic legends have it that Okichi became Harris’ lover and right hand for many years, only to be abandoned once her usefulness was over. Other tougher-minded historians claim that Okichi lasted but a few days in Harris’ employ, only to be tossed out on suspicion of having syphilis. She may or may not have run a bordello after that (or was it a saloon?), and may or may not have committed suicide in her early '50s (or did she just fall into the river in a drunken stupor?). Whatever the real tale, local tourism promoters never let the facts get in the way of a marketable story. The Harris/Okichi story has become a cottage industry. (You may recall it as the subject of the film “The Barbarian and the Geisha” starring John Wayne as Townsend Harris). There are also some lovely remnants of 19th-century streets and buildings to stroll around in while you take in the lore.

But of course the Ajimi Team was mostly there for the food. All along the Izu coast one sees signs for himono (ひもの), fish of one kind or another 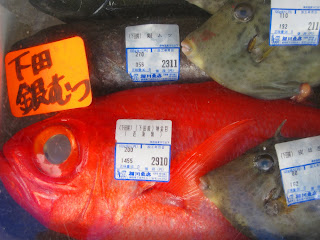 that is dried in the sun, with or without flavorings such as miso or salt. Kinmedai (金目鯛) is another heavily advertised local specialty. This version of tai, or sea bream, is served in many ways, including stewed whole or atop kamameshi (釜飯), a hearty dish which usually combines rice, vegetables, mushrooms and meat or fish which is then baked in a metal bowl. We also tasted wonderful wakame (若布), fresher than we’d ever tasted it, pulled that day from the sea, and were introduced to fresh nori in its original red state in our miso soup. Overall, Shimoda is not a grand dining destination but we found a few excellent izakaya （居酒屋）and shokudo （食堂）that served up memorable meals built around local products. Snails were eaten. More on that in the next post.
Photos, top to bottom:
1. The Pacific coast from the seaside walkway south of Shimoda
2. Harvesting wakame
3. Kinmedai and ginmutsu (Japanese bluefish)