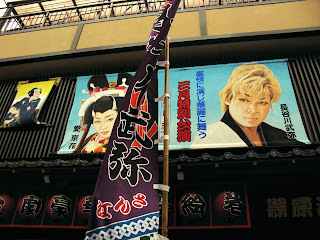 In Jujo, a neighborhood at the northern edge of Tokyo, the Shinohara Engeijo (篠原演芸所), built in 1951, is one of the last surviving examples of a style of entertainment that was once widespread throughout Japan. An "engeijo" is a theater or variety music hall where performers engage in "peoples' theater" or taishuengeki (大衆演劇). On a recent Sunday afternoon, guided by our friend Kokubo Shinichi, we went there for a performance by the Hasegawa Gekidan (長谷川劇団).

The performance began at 12:30, but, as we entered the theater at 11:30, it was clear why we had been advised to arrive an hour beforehand. Spectators were already sprawled out across half of the tatami area, and all of the prime seats near the stage had "reserved" signs attached. It was like a lively indoor picnic: everyone was eating, drinking and chatting in a very familial way. Hanging from the ceiling were large colorful banners with pictures of the players, members of the Hasegawa family, mainly, with a few non-Hasegawas for good measure. The mother of Hasegawa Takeya, one of the leaders of the troupe, was taking the tickets. We bought some onigiri and tea from the snack bar and sat back to wait for the show to begin. 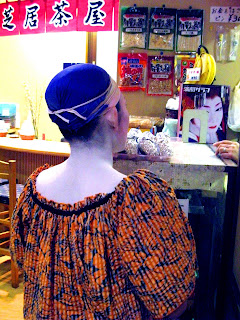 Oddly enough, we learned just before the opening curtain that the afternoon's entertainment would include a segment on the life of Okichi, the maiden who allegedly was seduced and abandoned by the first US consul to Japan. Coming on the heels of our recent visit to Shimoda, where it was all Okichi all the time, this seemed to augur well for an interesting performance, or at least one whose general countours we would be able to follow with our limited Japanese.

But first there was the opening act which gave the actors a chance to introduce themselves and to engage in a bit of interaction with the audience. The first few segments looked a lot like voguing, with the younger and hunkier members of the troupe dancing across the stage to J-pops, occasionally pausing for a sexy pose to enthusiastic applause. The audience called out to the performers and offered them gifts: an envelope was slipped into a kimono sleeve, a bottle of health drink appeared, later a can of coffee. There was a very good onnagata (女形) act in which a middle-aged man in full geisha gear impersonated a sweet young girl. 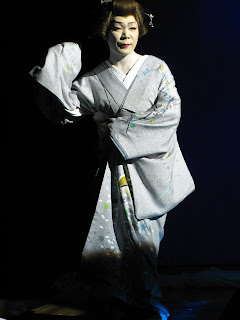 Then came the star of the show, Aikyouka (愛 京花), wife of Takeya and co-leader of the troupe. A very appealing actress, she performed a couple of lively dance numbers, then moved through the theater, shaking hands with every one of the 100-or-so members of the audience. She later returned to the stage for a more formal Japanese dance during which an onlooker attached a fan of thousand-yen bills to her costume. After a little more dancing from the full troupe (with the aid of a smoke machine), the curtain rang down for the first intermission.

When the curtain rose again we were in the 19th-century. Shimoda Elegy -- or Shimoda Aika (下田哀歌) traced Okichi's tragic story from the arrival of Townsend Harris to her eventual death. Or, at least we assume it did. The story was told in three hour-long acts and, despite Aikyouka's lovely portrayal of the doomed woman, we could only manage to stay rapt for the first two. We left before the final denoument, after the murder of her lover but before Okichi ended up in the river. 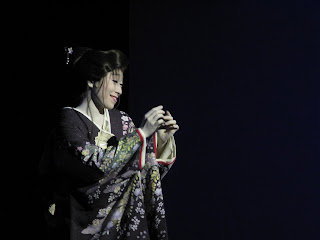 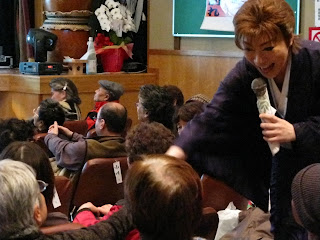 yen for adults and 800 yen for children. Here's the current schedule and location information along with links to other Tokyo- area Taishuengekijo in Asakusa and Kawasaki:

1. Banners outside the theater
2. An actor grabs a quick snack while getting into costume
3. Onnagata
4. Ai-san onstage
5. Ai-san works the crowd