Skip to main content
Labels
Posted by Nicholas Vroman May 12, 2013

All Roads Lead to... 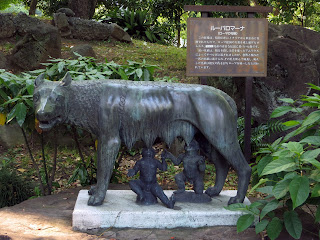 A delightful spring day found the Ajimi team taking some time off and going for a walk through Hibiya Park. We've been there many times, usually for events. We'd never taken the time to just wander around, look at the flowers, the sights and the people - who were out in force on this perfect day. First order of  business was to check out flower garden #1 on the north side of the park. A sweet little fountain, with pair pelicans surrounded by aloes, shooting streams of water from their extended beaks, stands at the entrance to the formal garden. Nearby is a somewhat lame deco-ish sculpture of a naked woman that I like to think of as Sacajawea. Perhaps it 's a bit more prosaic. Maybe it's Terpsichore. I don't recall Sacajawea ever being portrayed with a lyre. Nonetheless, her upraised hand made us want to follow her. And sure enough she led us to a she-wolf, hiding in the copse behind her, suckling a couple of chubby little babies - Romulus and Remus.

It was particularly serendipitous to find this copy of the famous Capitoline Wolf sculpture near our home base. On our recent visit to Rome, we had ample opportunity to see another copy of it on the Capitoline Hill and a very amusing topiary version. It was a pleasant surprise to find little bit of the eternal city in Tokyo.

This she-wolf came to Tokyo in 1938. Seems that Mussolini envisioned himself as a modern Romulus -  the founder of a New Rome - so he had a mess of copies of the Capitoline Wolf made and sent around the world. There's apparently still one standing in Cincinnati. He also gifted both Rome, Georgia and Rome, New York with she-wolves of their own.

The Capitoline wolf was once thought to be of Etruscan origin. Now it seems that she may be a 13th century copy, stylistically modified from an Etruscan original. The renaissance babies were added, well... in the renaissance. She's ever since been a symbol of Rome. Co-opted by fascists, she managed to hold her own. And here she is, hidden in a glade in the heart of a megacity, always on guard. Her adopted brood oblivious to anybody who stumbles upon them.