Skip to main content
Labels
Posted by Virginia Sorrells May 01, 2013 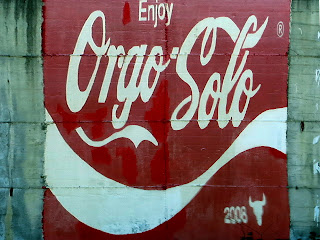 On one of the few sunny days during our stay in Sardinia's Barbagia region, we drove through the hills to the town of Orgosolo.

We won't go into the town's reputation as a bandit stronghold, which has been amply documented elsewhere.  But it was only 6 years ago that radical poet and union activist Peppino Marotto was gunned down in an Orgosolo street, perhaps for his politics, but more likely to settle a vendetta that went back to the 1950's. Suffice it to say that the spirit of independence and rebellion captured in the brilliant film Banditi a Orgosolo lives on here, not just in the Via Antonio Gramsci and the Piazza Carlo Marx (plenty of those elsewhere in Italy)  but in the murals on display everywhere you look.  The works feature political messages and exhortations to action reminiscent of Mexican muralismo.  Viewers are invited to reflect on issues ranging from poverty in Africa to the US military presence in Sardinia to the 9/11 attacks.  There are a fair number of images of people in typical Sardinian dress but they are often armed, apparently ready to do battle with anyone who crosses them, especially capitalists.

Apart from its setting high in the mountains, Orgosolo is not an inherently attractive place.  The murals have given outsiders a reason to visit and quite a few do, which helps boost the local economy.  Other Sardinian villages have taken heed and picked up the brush to paint murals of their own, but without the incendiary messages.  Many of the lovely villages we passed through had spoiled perfectly beautiful stone walls with images of picturesque old timers, sheep, scenes of a simpler times that maybe never were... the muralismo of Orgosolo has been degraded into folksy kitsch.   And, spookily, the 2D villagers portrayed on the walls of these places frequently outnumbered the flesh and blood citizens out in the streets.