Skip to main content
Labels
Posted by Nicholas Vroman May 05, 2013

Every Bicchiere Tells a Story (Don't It?) 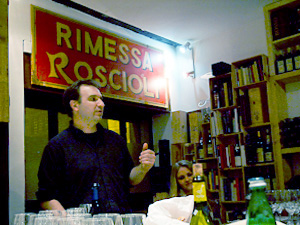 You might call Alessandro Pepe an "anti-terroirist." I had brought up the notion of the terroir of the Yakima Valley. But before I could regale our group of wine lovers with details about the Waluke Slope or the Rattlesnake Hills, Alessandro, head sommelier at Roscioli, burst into laughter. In his view, terroir is in essence a marketing ploy French winemakers cooked up some years ago to add more mystique to already good wines and increase their market value. According to Alessandro, there more important factors to keep in mind when you drink a glass of wine.

But I've gotten ahead of myself. Let's back up a bit.

When we arrived, Roscioli was packed with all kinds of cheeses, salumi...and diners. Soon Alessandro whisked his small group of student drinkers down an alley, then through a few other backstreets to an unmarked door.  Beyond which lay a kind of laboratory for exploring wine: a central serving station enclosed by a couple of long counters with high stools. Tall shelves on three sides were crammed full with bottles of wine. A open door to the back room revealed even more cases.  It was the very room in which Bourdain had gone all weak-kneed over the wheel of cheese.

About 9 or 10 tasters had signed up. Alessandro broke the ice, asking each of us what we knew about wine.

That's when I brought up terroir.

It's not that Alessandro doesn't believe in terroir. Place, weather conditions, traditions - they all make for better or lesser wines. But there was one thing he was insistent on: there are more important considerations - even the personality of the winemaker will determine how the wine tastes. And the most satisfying and interesting wines have stories that give them a depth that goes beyond taste alone. After 10 wines, he had convinced us.

It's not about drinking the most expensive wines or eating the fanciest food. It's about establishing some kind of relationship with the producer. Not all of us have Alessandro's access to winemakers. Most of us won't get to hang out with them and hear their stories, but we can discern the personalities behind their art. We get much closer to these people every time we drink their wine and eat their food. The manufactured food products that line grocery store shelves exist for the sole purpose of filling maws - they don't encourage relationships. Enjoying good food comes, in part, from connection.

Over the next three hours, Alessandro carefully led us through a range of personalities, of tastes, of stories that made for an evening of discovery and conviviality.

Here's how it all went down.

1. Benevolo 2011 Movica  - This nice white is made by Mario De Lisi. He's a small producer frome near Orvieto. His Movica is a blend of 40 % grechetto piccolo and 60 % verdicchio. It had nice acid and quick finish that went will with a creamy burrata di Corato with Capuliato, an intense Sicilian sun-dried tomato spread.

2. Cesanese di Olveano Romano Silene 2010, Damiano Ciolli - Virginia had asked for a wine from Lazio, the province where Rome is located. Alessandro's not a big fan of the region's wine, but he brought out this nice cesanese. Dimiano Ciolli took over the family business in 2001 and quickly built up the quality (as have many Lazio producers) of the sturdy workhorse Cesanese grape. This wine had an almost evergreen quality, a bit of stinky nose and mineral finish that went will with the mozzarella di bufala with sundried cherry tomatoes.

3. Schioppettino 2006 Bressan - Fulvio Bressan has been working with ancient and obscure vines to produce a spicy, leathery, tobacco-y, cedar-y red that Alessandro described as sciupettino (noisy). That apparently describes the winemaker himself. Increasing the noise factor, it was served with a robiola di Roccaverano, a tangy goat cheese from Piemonte, that made the action in da mout' all the more exciting.

9/11/13 addendum - On Katie Parla's food blog there is a post highlighting Fulvio Bressan's    recent vile and racist postings on facebook about Cécile Kyenge, Italy’s Minister for Integration. The Ajimi team does not recommend supporting this man, no matter how interesting his wines are.

4. Ronco del Chiesa 2009, Borgo del Tiglio - Nicola Manferrari is one of the most amazing winemakers in Fruili. His Ronco del Chiesa is made from tocai grapes, and in all honesty, I'd never had a wine quite like it. It had a texture of pure silk, and hints of butterscotch and vanilla. It was soft and unctuous. When we returned to the wine a hour or so later, it had turned more austere and bright. Alessandro told us that Nicola rarely smiles. He makes serious wine, some of the best in the world. It was paired with Parmigiano-Reggiano vacche rosse, the one made from red-haired cows, though this was one Italian wine that didn't need to be drunk with food.

5. Pergole Torte 2007, Montevertine - Sergio Manetti, the old man of Montevertine, withdrew his wines from the Chianti Classico appellation, thinking that the whole thing was creating the conditions for lesser wines.  His son, Martino, carries on the tradition, putting his own stamp on these beautiful sangioveses. A perfect accompaniment was a prosciutto San Daniele, from Northern Italy.

6. Barbera del Monferrato Rossore 2010, Iuli - This barbera comes from a winery in the tiny village of Montaldo di Cerrina which opened its doors in 1998. Winemaker Fabrizio Iuli is a modern traditionalist, producing well-oaked, big wines with strong acidity, the perfect thing to go with an intensely meaty salsiccia Abruzzese.

7. Nanni Cope 2010  - Giovanni Ascione's vineyard may be tiny, but he's obsessive about every aspect of viticulture, from harvesting to production. His Nanni Cope, made from palagrello nero, was a beguiling chameleon of a wine, at one moment plummy, then with the flush of berries, then onto another fleeting taste and smell - a sort of 4-dimensional wine. It was served with a fatty and full-flavored capocollo di cinta senese (a very special breed of pig).

8. Barolo Vigna Lazzairasco 2008 Guido Porro - This barolo is made by 4th-generation vintner Guido Porro. It's a fine, elegant wine, not demanding, rather friendly, which matches what we've learned since of the winemaker himself.  It was paired with the best mortadella on Earth, nothing like the run-of-the-mill version of this meat product we'd experienced in the US. The mortadella Pasquini e Brusiani is from a producer in Bologna. Alessandro says only a handful of producers make good mortadella anymore.

9. Barbareso 2008, Roccalini - This nebbiolo, made by Paolo Veglio,  was a big, well-balanced, classic Barbareso, matched with some extremely savory pata negra Joselito from Salamanca. Alessandro decried the state of Italian sausage making, saying the the Spaniards are leading the field now. (He may be right on a certain level, but our further adventures in Sardinia proved that Italy still is way up there when it comes to cured pig meat.) Somewhere during all these courses a bowl of pasta alla gricia appeared. This simple Roman dish showed how a few simple ingredients (as long as they are the best), using a simple recipe (as long as it's perfectly prepared), can create a transcendent experience. The big Barbaresco was perfect with crispy, fatty chunklets of guanciale, handfuls of funky pecorino Romano over thick toothy tubes of rigatoni.

10. Moscato d'Asti Biancospino 2011 La Spinetta - This little beauty of a wine from La Spinetta was the capper to an amazing indulgence - a perfect wine for an early spring evening. There was a hint of green in its pale yellow visage. It had a round, fruity flavor of apricots and peaches, with a hint of flowery citrus. We topped it off with pieces of salty, grainy stravecchio rosso di Amandola and some red wine biscuits.

The late-night streets were nearly empty as the Ajimi team sauntered, sated, back to our apartment, feeling at one with the universe, or at least the portion of the universe responsible for producing such wonderful gifts of food and wine.

To find out more and book an evening with Alessandro, go to this link -  http://www.winetastingrome.com/