Skip to main content
Labels
Posted by Nicholas Vroman May 28, 2013 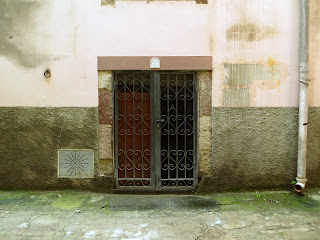 The Ajimi team had just arrived in the enchanting medieval town of Bosa. Austere, skinny buildings in candy colors lined narrow streets that mazed up a hillside toward a 12th-century castle. We dropped our bags and hit the streets. Only a couple of hundred meters from our hotel, along Via Carmine, we came upon Su Caricalzu, a cantina belonging to Zio Ignazio. I peeked down into the perfect wine cellar - low ancient arched stone ceilings, casks of wine on rough-hewn wooden tables, shelves and nooks holding old wine bottles, bric-a-brac, and fading photos. Zio Ignazio caught my eye and beckoned us in.

He asked us if we wanted to try some of his malvasia.

Of course we did! Apart from taking in the medieval surroundings, we had made a point of coming to Bosa to sample its most famous wine. We had been in town for probably less than an hour and our wish was being fulfilled. Zio Ignazio carefully filled three little glasses with some of his golden malvasia. Clean and sweet, with honey and honeysuckle overtones, it tickled our tongues with a medley of fruity tastes -  apricots, plums, and peaches. Imagine the original idea of nectar - the drink of the ancient Greek gods. I imagine that it tasted like this.

Malvasia is one of the more ancient grape varieties. A favorite of the Greeks, it spread around the Mediterranean. It was a popular wine until very recently, when after World War II tastes went toward drier reds and more easily appreciated whites. Luckily, the folks around Bosa ignored trends and kept making the stuff, pretty much the old fashioned way.

Zio Ignazio has some small holdings near town where he makes his incredible malvasia and a Nieddu, a bone-dry cannonau, austere, bracing, and lacking any oxidation, which mars or occasionally enhances  Sardinian wines. Zio Ignazio's generosity and ebullience was reflected in his wines.

We had stumbled upon his little man cave - a party room den that even had a urinal attached to a wall, next to a Goth-headed spouting font - by accident.  Zio Ignazio happened to be there and he shared his wine. I imagine that most of the year, it's more private - just him and his buds, making and drinking wine, shooting the shit. However on the first Saturday before Fat Tuesday, Bosa puts on the Karrasegare Osinku, the Festa di Cantina, when all the cantinas in town throw open their doors for food, drink, and pre-lenten revelry. That would be a good time to visit Zio Ignazio. Say hello from us. And tell him, "Thank you!" 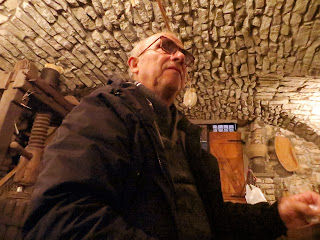 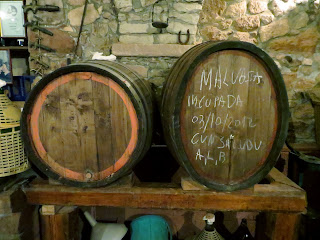 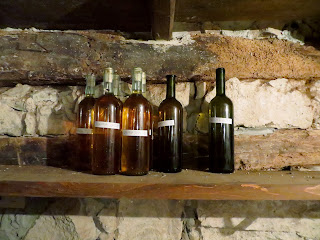 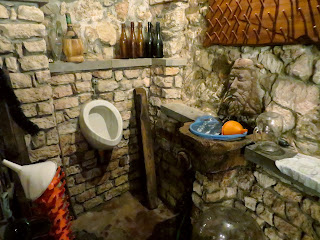 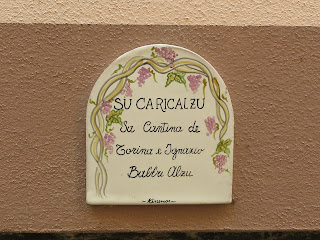