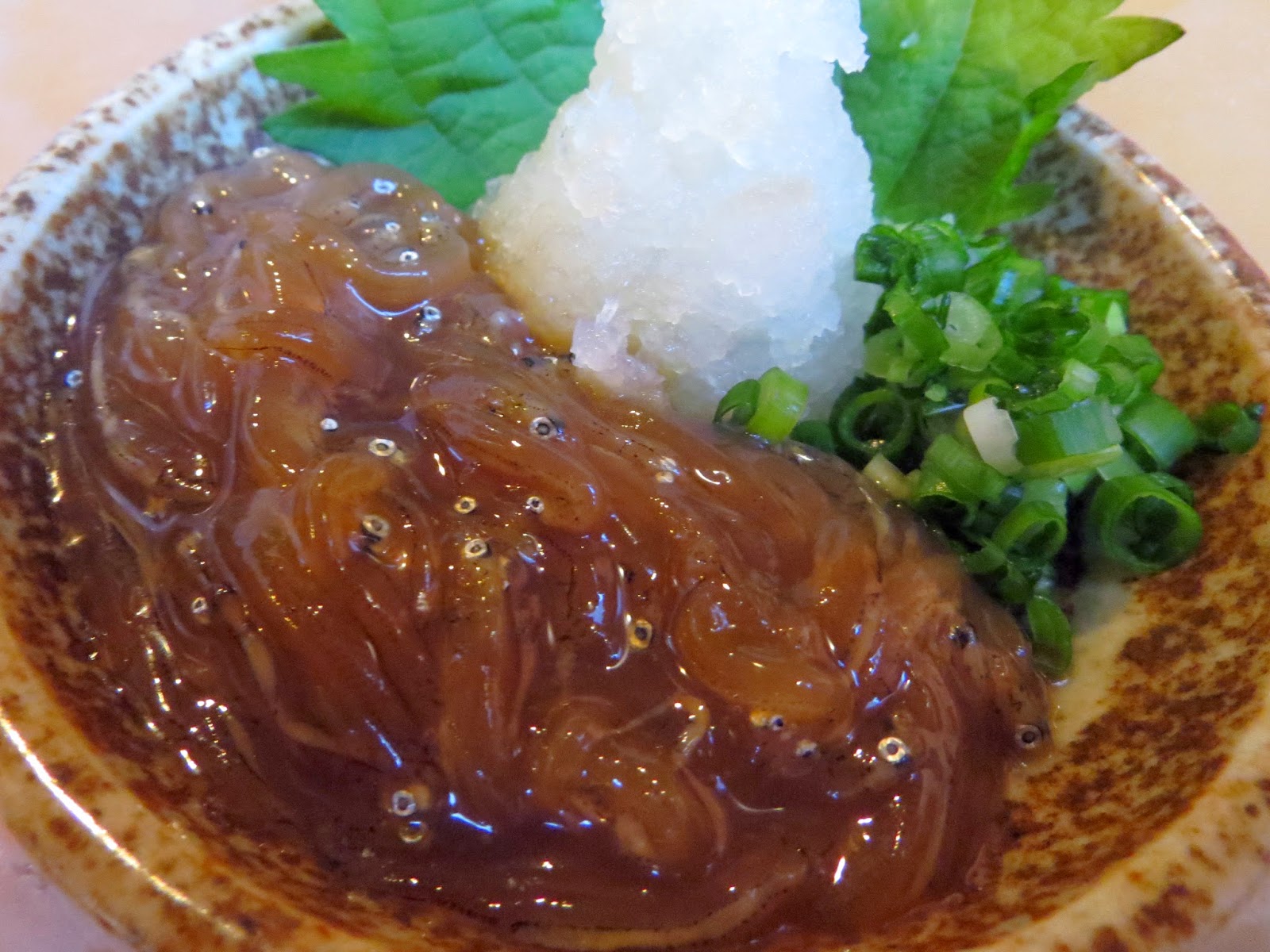 I remember hanging out in Bilbao's San Francisco neighborhood. This was long before the Guggenheim Museum was even an idea. There was a place not too far from the Rio Nervion where I used to get angulas. A funky little place. Acrid air filled the streets, wafting up from the river. It was a favorite place to sit down with a txikito of ardo beltza and a piece of toast laden with angulas - warm baby eels - their little bodies a-tangle, their eyes looking every which way. Those were the days. When even the most run down and dangerous area of town had little culinary oases where one could relax and enjoy what are now the province of rich gourmands who take a special pleasure in devouring all things endangered and unsustainable.

I don't eat angulas now. I don't even eat grown up eels. Not because I don't like them. I do. But eating does involve some moral choices. It's not all about having that final taste. Being the last person to remember. I'm reminded of the old man at the end of Redmond O'Hanlon's Into the Heart of Borneo. The one who tells Redmond that yes, he had seen Borneo Rhinoceroses. In fact he had killed a few. Will I be like that old man in a few years, telling some young guy that yes, I had eaten angulas? In fact there were a hundred or so on that piece of toast.

Now they make fake ones. They're called gulas. They're made of surimi, with little spines and eyes painted on them with squid ink. Rumor has it that low-paid Mexican workers paint them. They taste like you'd expect. And the eyes aren't really all that realistic.

Which brings me to shirasu - the whitebait of Japan. Baby anchovies or sardines. They're ubiquitous in Japanese cuisine. A classic is oroshi - grated daikon topped with dried shirashu. You eat it with a dollop of soy sauce and well... it's food. There's a bit of protein in those vaguely crunchy fish things. They're right up there with gulas!

But then there are the fresh ones - nama shirasu (生しらす). Not too far from Tokyo is the Shonan Coast. It borders Sagami Bay. This is a great breeding and fishing ground for anchovies - and thus, shirasu. Most of them are quickly blanched in salt water, dried and shipped throughout Japan to add a dull bit of briny fishiness to dull foods. However the closer you get to the source, the closer you get to the fresh stuff. Which is where it's at.

A favorite place for the Ajimi team to gorge on nama shirasu is a little fish shack near the tiny fishing port of Kotsudo, just over the hill east of Kamakura. It's called Yuuki Shokudo. They serve up the little critters in huge mounds. Doused with a little shoyu and a sprinkle of green onions, they stare you down, daring you to eat them. And eat them you will. And you will love them. 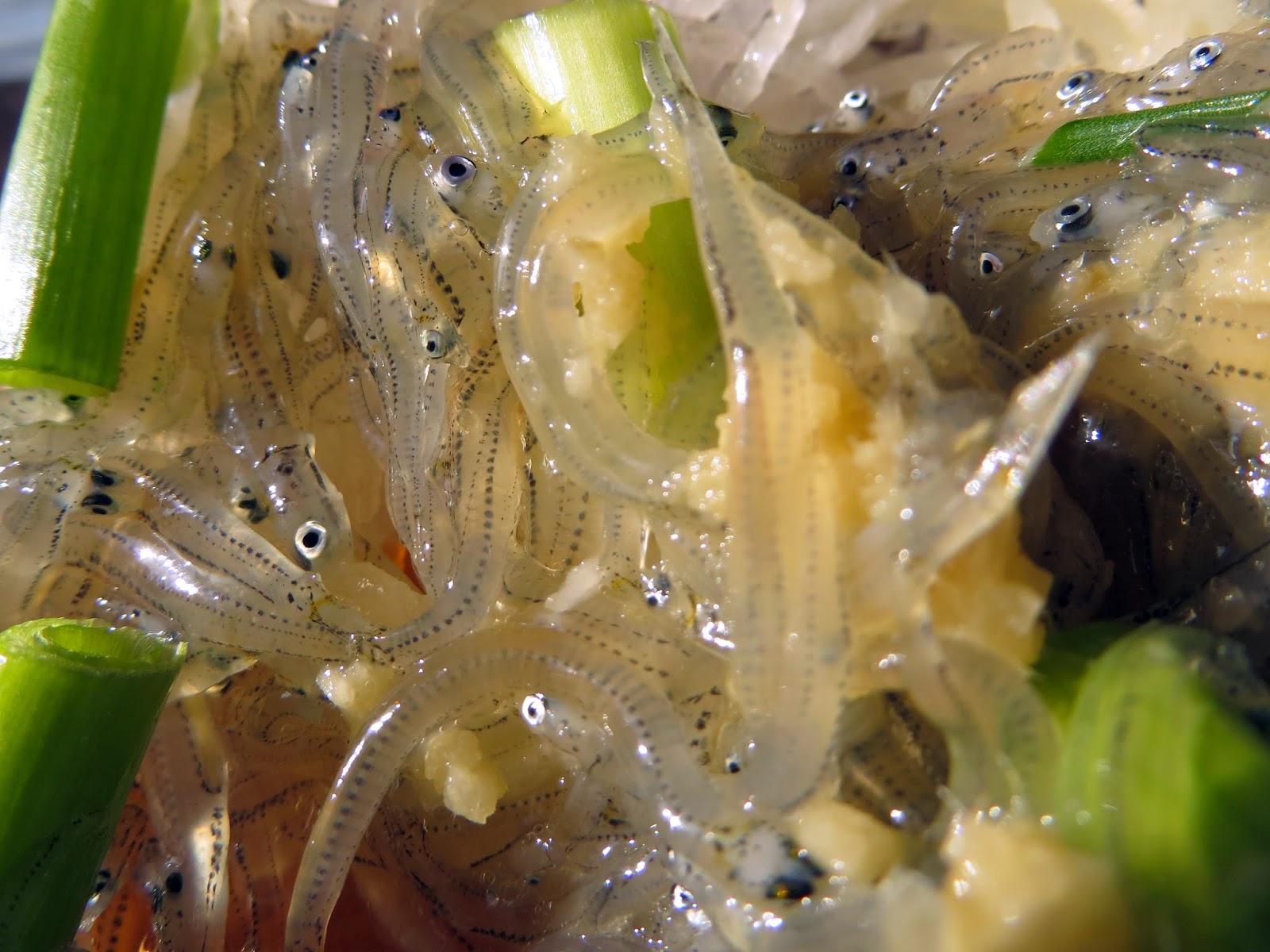 Just recently the Ajimi team found themselves exploring Noge-cho, a neighborhood of Yokohama. It's a wonderful warren of streets filled with old fashioned izakayas, yakitori joints, informal western-style restaurants, sakanayas, jazz clubs, sunakus and so much more. It borders the Ōoka River (or the Ōokagawa - 大岡川). River air drifts lazily through the streets. We stopped in at a nicely appointed washoku restaurant where we came across nama shirasu on the daily menu. Whenever the Ajimi team comes across nama shirasu, we've got to order it. Or at least one of the members has to. And a lovely little bowl arrived, little eyes staring. A taste of sweetness and brine. For a moment, it took me back a bit to the old days in Bilbao. Yes, I remember shirasu. In fact, I ate a lot of them once.